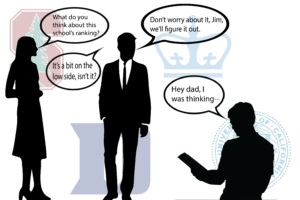 As the college admissions season winds down, many seniors have had to face difficult decisions, from choosing a major to ultimately selecting a school.

Then again, these choices may not be entirely their own as parents’ opinions can often loom large.

Living in well-off, well-educated Saratoga, many students are lucky enough to have parents who care enough about their child’s education and future that they insist upon being heavily involved in the process. Millions across the country don’t have that same luxury. With such supportive parents offering their resources and advice, it would be illogical for them to not play some part in the college admissions process if they are willing.

But there is a line between being supportive and being overly involved, one that parents here often cross. The guidance they provide frequently snowballs into controlling the entire situation. For the students, this is just as, if not more, frustrating as attempting to brave the process alone. Instead, parents should be better aides by keeping their child’s own goals in mind when contributing their own opinions and being honest about financial support, but ultimately respecting their children’s decisions.

As an example of micromanaging, a close friend was lucky enough to be deciding between two prestigious colleges. Though one was technically ranked higher by US News, both were, in all senses, incredible universities well suited to my friend’s goals.

My friend was hesitant to attend the “better-ranked” school, as he felt the stressful and cutthroat environment would not be conducive to his best interests. Instead, he gushed over the other school, going into expressive detail about its various programs and how others he knew had admired its “work hard, play hard” environment.

While his preference was obvious, his parents had other ideas. For weeks, they pushed him to re-evaluate his mindset and tell him that regardless of what he thought, he would be able to thrive at this more prestigious college. And eventually, against his judgment, he gave in.

When he finally arrived at college, he wasn’t surprised to find his personal expectations met. While he was thankful for the opportunity to attend and has undoubtedly advanced academically, his personal life has not been what he hoped it would be.

My friend would have greatly appreciated help in comparing the pros and cons of attending each college, honing in on what would truly make him happy over the next four years. But despite his parents’ good intentions, their advice taken to the extreme resulted in a suffocating process and left him at a college where he struggles to fit in.

What would have been a better approach to my friend’s decision struggle? His parents could have acknowledged his opinion but made their own recommendation based on his future goals, with argument points to back it up. They could have legitimately done research into what my friend was trying to say, rather than conforming to their prior beliefs on prestige and rankings. There are numerous different approaches and techniques they could have used to provide stronger support, but it boils down to actually having a discussion with him rather than telling him “Here’s what you’re doing to do, no objections.”

At the end of the day, parents will not be there in college; whatever decisions result from the college admissions process should be primarily on the student’s shoulders. At this point in their life, as burgeoning legal adults, students should be in control of their decisions, not sitting back and leaving it up to others.

Obviously, they can’t make every important decision on their own. And that’s what parents are there for — to provide advice and guidance, much like a counselor, but not to commandeer a situation. Saratoga parents often don’t distinguish between the two enough.

Having parents constantly pushing their agenda can counterproductively add stress during an already-stressful time. Instead, they should act more as a guide, making recommendations and critiques of the student’s choices, than the primary, unyielding decision-maker. In doing so, parents can cooperate with their child much more effectively and work toward the best interests of everyone involved.