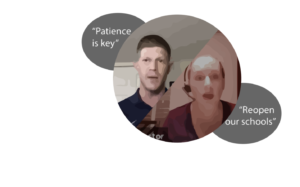 After one Feb. 19 post by junior Noora Fayad arguing that patience is key in these troubling times and that SHS should delay reopening, any respectful conversation soon gave way to a slap fest as parents battled back and forth, some in support of Fayad while others angrily rebutted her points.

One parent, who has a sophomore at SHS, said that it was time to embrace in-person education and move into hybrid education immediately. In another comment thread, a parent wrote that remote learning negatively impacts the mental health and social-emotional well-being of the majority of students. She questioned, “Why should YOU [the author] have a choice to have your needs met but not the rest [of students]” and encouraged others to advocate for reopening schools as soon as possible.

These conflicting reactions show the wide range of opinions parents have expressed on this app and in online board meetings in recent weeks as well as the degree of anger the debate has created. The current CDC guidelines on reopening schools suggest that many K-12 schools will be able to safely open for in-person instruction (before all teachers are vaccinated) provided that they follow a number of strict mitigation strategies including universal use of masks, physical distancing and contact tracing.

The district plans to begin Phase 3A, where schools open for one hour a week, on March 24. Then, if Santa Clara County enters the Orange Tier in the COVID-19 tiering system or when all staff have had the opportunity to receive the vaccine, the district will advance schools beginning April 12 to Phase 3B, which consists of in-person instruction in two rotating cohorts two days a week. The majority of students will still be online during classes in this mode.

Some parents at the board meeting called for the district to move more rapidly. In a protest on Feb. 26, a group of parents from LGHS stood in front of the school to voice their frustrations with what they describe as the slow pace of reopening.

“Schools have a moral, ethical, and legal obligation to reopen now to provide in-person education to the greatest extent possible as required by the California Constitution and California Code of Education,” said Suzanne Nestor, the protest organizer and leader of a parent coalition pushing for reopening the district. Her daughter is a freshman at LGHS.

Nestor recently appeared on national TV show Fox and Friends where she expressed her anger at the district’s plan: “Parents, teachers, and students alike are all frustrated because we know that schools can open safely,” she said. “One hour a week is a slap in the face.”

“It is the duty of the schools to provide in-person education for the kids and, according to our state guidelines, schools should open for hybrid learning tomorrow,” Keogh told The Falcon.

Keogh believes every day without in-person schooling is a day that SHS has failed students, with Phase 3A being a way for the district to dodge its responsibilities with no real instructional plan.

However, 49.3% of SHS parents in the survey said they want the schools to reopen more slowly. Some parents at the board meeting worried about logistical problems with reopening like meeting social distancing guidelines based on classroom capacity and the potential mixing between sports and school cohorts.

“There should be no discussion about opening the school until everyone is vaccinated,” said Harish Lakhani, parent of sophomore Ishir Lakhani.

Others advocated a mix of in-person and online schooling, where the schools would open for a trial run to test the system and see how a "hybrid" approach would work — largely the approach of Phase 3A.

“Perhaps having an Early Bird and Late Gator system for those who do better in the morning and afternoon twice a week and the rest online may be a way to work in both in-person and online work,” 2003 SHS alumnus Daniel Onn said. Onn is an active member of the Saratoga High NextDoor.

Onn believes having class take place outdoors is a better approach rather than having one hour of instruction as laid out in Phase 3A. Despite this idea, Onn said he is concerned whether now is the right time to reopen as new variants of coronavirus are becoming prevalent in the U.S. and children have low priority for vaccination.

Onn said that the reopening of schools has become a sensitive topic in the area and it has turned needlessly political.

“Some may not care about the health of our students and school employees,” Onn said. “We must [reopen] in a calculated fashion and not let politics take over.”

Even with phased reopening plans and mitigation measures at the two schools, many parents are still highly concerned about the virus: 17.3% of respondents selected that their student won’t return to campus until full vaccination or no COVID-19 threat.

Nevertheless, as cases subside and the vaccination rate increases, doubt is slowly being replaced with some degree of hope.

“We are excited to welcome students and staff back to campus in a safe and thoughtful way,” principal Greg Louie said. “We have always been intentional about proceeding thoughtfully, whether it pertained to students' grades, assessment practices, social-emotional and mental health support, and returning to campus.”