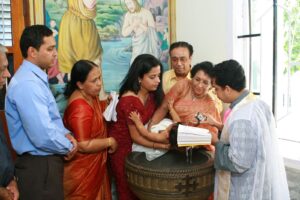 Photo by Sarah Thomas
Sarah Thomas was baptized in Kerala as a toddler.

Junior Sarah Thomas recalls attending a church service at a predominantly Caucasian church in Sunnyvale as a young child. As the only Indians in a room of Caucasian Christians, she and her parents found themselves excluded from the church community, never being invited to bake sales or lunch after service.

Sarah and her family then joined a South Indian church to better connect with the community, only to find the sermon given in Malayalam. Most of the children were bilingual, and Sarah, who only speaks English, couldn’t understand what was going on.

“[The people in both churches] don’t think you’re part of the church community, so it can be hard to feel included,” Sarah said. She never fit in with either church because she was not as religious as the other Indian Christians and did not identify with the primarily Caucasian church.

Sarah often struggles to separate the reality of various churches from Christianity itself.

Although she recognizes Christianity as a religion that preaches love and acceptance, she acknowledges that many connect blatant racism and homophobia with some churches.

For example, some churches use verses from the Bible — like Leviticus 18:22, which has been generally interpreted as prohibiting some or all homosexual acts — to justify their stances against abortion and gay rights. This makes it hard for her to identify as Christian sometimes because she doesn’t agree with a lot of what the church does. Sarah and her family have been Christian for as long as she can remember.

While Sarah doesn’t pray weekly as many Christians she knows do, she does so every few months to collect her thoughts and reflect.

“Praying isn’t about asking a higher power; rather, it’s about taking time to acknowledge and be yourself,” Sarah said. “Recently, one of my mom’s friend’s children passed, and I felt grateful that I was OK. I wanted to pray for his family because I felt saddened by the loss, but I didn’t know him. Praying helps me recenter.”

On the other hand, sophomore Saejel Thomas’ family (not immediate relation to Sarah Thomas’ family) is Christian Agnostic, which means they are unsure about the existence of God. They don’t go to church or strictly follow religion. Saejel and her older sister were baptized as Christians, continuing a tradition of Christian agnosticism in her family — her grandmother went to church and held ceremonies after her grandfather passed. Her family and friends vary in the extent of their religious beliefs.

“I like embracing my culture, and I don’t think being agnostic takes away from any of that,” she said. “I still celebrate the holidays and go to weddings.”

Saejel’s ancestors built a church in Kerala, one of the southern-most parts of India, and her family always visits the church whenever they go to India.

“It’s a very special family place because my grandparents and great grandparents are buried there, so when I think about connecting back to the church, I think of my family,” she said.

Both Saejel and Sarah’s parents are from Kerala. Christians from Kerala believe in the Apostle Thomas who came to Kerala in 52 A.D. and baptized the ancestors of those present today.

Kerala is extremely diverse because different cultures occupied it over the course of its history. In 1498, the Portuguese visited Kerala for the first time and controlled trade for the next century. The Dutch arrived in the 17th century, but as local power grew, they were driven out at the end of the 18th century. The British held power until India gained independence in 1947, and Kerala became an official state in 1956.

Each culture left a legacy behind, creating the multicultural and diverse society that exists today. As a result, people from there have a myriad of different names depending on their religion and background.

“A lot of people assume Indian people are always Hindu, but my family is Christian because we are from the southern part of India,” Sarah said.

Saejel and Sarah said when most Americans think of India, they primarily think about North India and disregard the multitude of other cultures and religions in the country.

“When people think of religion in India, they think of Hinduism or Buddhism, but Christianity is the third largest religion in India,” Saejel said. “It’s often overlooked and unrepresented, whether it’s in school or in the media.”

Christians in India make up 2.4 percent of the population and live prominently in the South. Due to the lack of representation of South Indians and Indian Christians, many people are confused about why Saejel’s first name is Indian while her last name is Christian.

The mispronunciation of her first name is a problem she often faces, something that makes her feel inferior to the people around her whose names are typically pronounced correctly on the first try. As a child, Saejel often felt unhappy that her friends had simpler, easier-to-pronounce names and would become extremely upset when her name was mispronounced.

“No one wants to be made fun of because of their name, or to be called something else that they’re not,” she said. “But I feel like as I’ve gotten older, I’ve gotten used to it, which obviously isn’t the best thing.”

However, over time she has grown to like her unusual name.

For her part, Sarah thinks her Christian last name has separated her from the North Indians she goes to school with. She also feels disconnected because she doesn’t speak Hindi as many other Indians at school do.

Because the majority of Indian students at SHS are North Indian, it makes it difficult to find someone with her background, but when she does, it’s “life-changing.”

In Saratoga specifically, Sarah believes there is a limited understanding of Indian culture as a whole.

“I don’t think a lot of people know about religious differences within the Indian community. I feel like people just see an Indian person and think ‘OK, they pray to cows,’” she said. “Not a lot of people go the extra mile to be educated about the incredible diversity in India, whether it be cultural or religious.”

Saejel thinks the school should work to expand students’ understanding of Indian cultures. She believes the addition of the ethnic studies class this year is a step in the right direction, and that education on Chrsitanity’s prominence in India would make it easier for people to understand the diversity of cultures and religions in India.

Saejel recalls being excited when the Netflix show “Never Have I Ever” was released in 2020, but was disappointed to see that the show only represented a sliver of Indian culture and included countless stereotypes.

“Seeing someone who looks like me in mainstream media makes me feel represented and welcome in these kinds of environments,” she said. “It’s really inspiring to see Lily Singh with her own talk show, and it makes me feel empowered. Anyone can do this, and I feel like that’s a really important thing for Indian girls to know.”

Similarly, Sarah also finds misrepresentation of South Indian culture in movies. In Bollywood movies, there is often a subtle nod to religion throughout the movie, even if it isn’t the main emphasis of the movie, which makes them difficult for Sarah to connect to.

There are many misconceptions and stereotypes labeled against South Indians specifically, decreasing the effort made into understanding the religious diversity there.

“In ‘Chennai Express’ [one of Bollywood’s most famous movies], South Indian people are portrayed as gangsters and blood-thirsty,” Sarah said. “It’s very interesting because to this day, a lot of North-Indian people will talk about ‘Lungi Dance’ [a song composed for Chennai Express] being so funny, but you look at yourself, and you think, ‘oh, this is about my culture. What’s so funny about that?’”

“Chennai Express” also contains dialogue considered offensive to South Indians. The movie follows a young man as he boards the wrong train and meets a girl, whom he soon falls in love with. Some lines in “Lungi Dance” mock and intentionally misrepresent South Indian culture, specifically “coconut mei lussi milake,” which means serving lassi, a sweet milk drink in a coconut; in reality, Sarah said no one actually drinks lassi out of a coconut.

Sarah said other religions also discriminate against Christians for being non-vegetarian — in Hinduism, beef isn’t consumed, while in Islamism, pork isn’t consumed.

“South Indians are non-vegetarian and eat beef, which is also a source of conflict,” Sarah said. “Thoughts like ‘look how barbaric they are’ or ‘it’s so disgusting that they would do that’ may come up when it’s really just cultural differences.”

Despite all the misrepresentation surrounding South Indian culture, Sarah embraces her roots and continues to be proud of her culture.