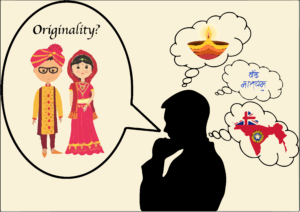 When I first saw “Indian Matchmaking” come across my Netflix Page, I clicked on it with some form of hesitant curiosity. I had been warned by nearly everyone — my aunt, my friends and even TikTok memes — about how out-of-touch the show was. And yet, I decided to go ahead and see what the hype was about.

I barely got through a single episode before turning it off. Willingly watching a show about an Indian auntie whose profession was to judge people’s “suitability” for arranged marriage was beyond what I could handle.

It’s quite entertaining in a “hmm, what are they going to try next?” way to see how America, the melting pot of cultures and all different types of people, approaches Indian culture. And yet, by watching this show, I was reminded of how every show that depicts an Indian character and their culture somehow needs to bring arranged marriage into the equation. From Raj in the “Big Bang Theory” to Kamala in “Never Have I Ever,” nearly every South Asian character I can think of involves some sort of arranged marriage phenomenon.

On one level, I understand it. Arranged marriage is somewhat taboo in our current day American society, making it a noteworthy topic. And honestly, we can’t even blame American shows for this when nearly every Indian movie I watch involves the same. Without fail, the plot always seems to revolve around the female lead’s arranged marriage. It’s no wonder American shows place such a heavy emphasis on this cultural aspect when native Indians do the same.

But at the same time, India has 1.35 billion people, with each state having its own unique culture and history. Arranged marriage is an interesting topic, but I’m sure they could pick from a gajillion other topics. For example, they could bring in the 22 different native languages so people stop thinking “Indian” is a language, explore some of the holidays such as Diwali that are scarcely known in the U.S. but celebrated by billions across the globe, or perhaps even venture into India’s history with British colonization and attempts to recover from it. Covering arranged marriage is just old at this point.

I can say with certainty that American popular culture is capable of finding another interesting topic that accurately portrays Indian American culture. Producers are getting paid millions to get creative and show some artistic license, not to sit around and regurgitate the same couple ideas.

I’m absolutely sure you’ll get more Indian viewers if you don’t ask them to sit through another mind-numbing depiction of how arranged marriage is supposedly the baseline of their culture.