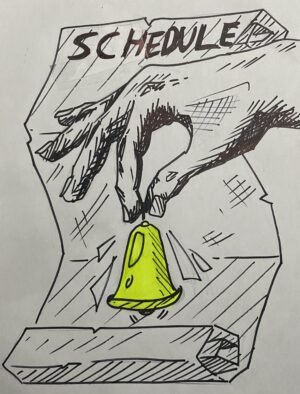 Photo by Eric Shi
This year’s bell schedule rings with approval from students and staff.

Senior Harrison Hwang calmly strolled out of class on a recent day. With a rigorous course load stacked full of AP classes, most would assume Harrison had a mountain of work awaiting him at home. However, Hwang said he had already completed his homework for the day at least in part thanks to the reintroduction of daily tutorials in this year’s bell schedule.

“The primary benefit is that I can have more time to myself during the school day and work on what I please,” Hwang said. “It frees up time after school to hang out with friends or do something else.”

This year’s new bell schedule features a number of changes, including the reintroduction of daily tutorials and 85-minute classes, shorter by 5 minutes than in recent years. The schedule aims to address criticism from students and teachers last year.

Students and teachers have both reacted positively to these changes. In a recent poll sent out in the Saratoga High School 2022-23 Facebook group, 93% of the 48 students who responded  supported the new schedule, 7% exhibited an indifferent opinion, and an astounding 0% reacted with disapproval.

According to principal Greg Louie, the district board faced a multitude of issues when determining the bell schedule for this year.

“We conducted a survey back in May to gather student opinions, which returned with a strong wish for the return of daily tutorials while maintaining a 3:45 p.m. dismissal on Red Days,” Louie said.

In recent years, bell schedules were identical for both Saratoga and Los Gatos. However, in an effort to satisfy the students and teachers at both schools, the district board took a new approach this year, creating two separate bell schedules for both schools.

Statistically speaking, Los Gatos students tend to take fewer classes than Saratoga students, so a later 7th period 3:55 p.m. dismissal time with 40-minute tutorials on both even- and odd-period days was considered acceptable.

At SHS, Louie mentioned that for student-athletes with six to seven classes, having a 3:55 p.m. dismissal time would delay practices and hinder the amount of time remaining in each day for homework.

“Ten extra minutes might not seem like a lot, but it really pushes things back and creates a ripple effect throughout the day delaying dinner and their bedtime,” said Louie. “We also took into account our teacher opinions, and most felt the later dismissal time would interfere with their lives outside of school.”

Hwang expressed appreciation for the school board’s decision to condense classes by five minutes from the previous year. While a 5-minute difference may appear negligible, Hwang believes that his ability to focus has improved, and he feels less fatigued near the end of classes.

While the majority of the student body seems to embrace the new schedule, senior Lucas Dennis said the new schedule has failed to address his biggest gripes from the previous year: the lack of consistency between even- and odd-period days, with one ending at 2:35 and the other ending at 3:45 for students students with 7th-period classes.

“It really just makes planning things outside of school more complicated in the slightest,” Dennis said. “I play basketball and baseball competitively, so scheduling practices becomes quite a nuisance with the inconsistent schedule.”

Dennis also thinks the 30-minute lunchtime is too short. A large number of upperclassmen venture off campus during lunchtime, and he said 30 minutes is simply not enough time to drive, order, eat and drive back in time for class.

“I recognize that I represent a minority of students, and from a practical standpoint it’s good that most students are pretty satisfied now, but I do wish we could have longer lunches and end classes at the same time for both days,” Dennis said.

For teachers like English teacher Natasha Ritchie, the greatest benefit stems from the daily tutorials.

“I’m a total believer in daily tutorials and I think over the years where we had it every other day, it was quite stressful to see all the students who needed help all come in on one day,” Ritchie said. “With the daily tutorials, I’ve seen an influx of students into my class spread across both red and blue days instead of one.”

Ritchie hopes the schedule can stay for the following years given the positive reaction exhibited by students and staff.

“It’s been really tough trying to find a schedule that works for everybody and I’m really happy with what we have now. So I think if people like this schedule, it should be here to stay,” Ritchie said.