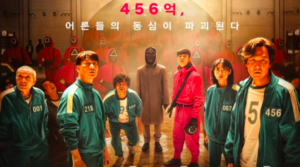 Currently topping U.S. charts and trending on social media platforms like TikTok, “Squid Game,” a new Korean original released by Netflix on Sept. 17, is a must watch nine-episode series that features popular Korean actors Gong Yoo and Jung Ho-yeon. The thriller drama follows the journey of a middle-age man in Seoul who joins a secretive survival game along with 456 strangers to win a cash prize of ₩45.6 billion, or $39 million.

The survival game isn’t just a typical bloody, Hunger Games-esque battle to win; it’s an actual critique on poverty amid capitalism. The participants are forced to play popular childhood Korean games (red light, green light, tug-a-war, marbles) that turn out to be a deadly assessment of injustice.

Only one of them can survive. The cutthroat competition — only one contender can survive — literally and figuratively juxtaposes with the innocent children’s games. The film fills the plot with tension as loyal friendships are tested and cheaters are ratted out. It’s no surprise that TikTok fans have taken a liking to the film, posting videos with the movie soundtracks and character analysis.

The diversity of participants in the game comments on the struggles from people of all backgrounds that join together in their financial struggle. Gihun, the middle-aged main character, faced divorce, a gambling addiction and business failures that left him with massive debt. Another character, a Pakistani migrant named Ali, was exploited in his workplace and hasn’t been paid in months, forcing him to leave his family. Sae-byeok, a North Korean defector, was robbed and separated from her mother, pressuring her to steal to survive. And Sang-woo, the supposedly rich businessman who graduated from a prestigious university, is secretly drowning in investment bankruptcy.

These 456 participants, each with their own desperate background, initially have a choice to leave the deadly game if the majority democratically votes to do so. After the first game, leaving over 200 participants dead, the remaining participants vote to leave the game and are put back into the real world. The film then documents the financial struggles and poverty the characters deal with that ultimately leave the characters begging to join the survival game again, where they would risk their lives for money.

Unlike most survival films, “Squid Game” stands out in its focus on exposing the flaws of capitalism. The characters, though from different walks of life, are all portrayed as just desperate people trying to survive the game to escape poverty. The rules in the game reflect rules in modern society, like the democratic vote early on in the film.

Even in the last episode, Gihun is forced to watch bystanders ignore a homeless man on the streets, shining light onto a pessimistic view of human morals.

A plot twist at the end does not disappoint either, though there are loose ends to be tied up in Season 2, which is predicted to be released in 2023. Anyone looking for a tension-packed, yet thought-provoking film should give “Squid Game” a go.