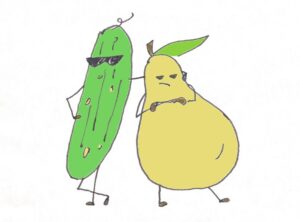 Photo by Lynn Dai
With a regular intake of water and the addition of these remedies to your meals, you’ll feel as cool as a cucumber.

As smoke from the Caldor and Dixie fires clouded skies and tinged sidewalks orange recently, I found myself having a coughing fit. My throat felt drier than sandpaper. Despite drinking the recommended eight glasses of water per day, my parched throat refused to be soothed.

Over the week of Aug. 16, AQI levels soared above 120, reaching levels so unhealthy that my girls’ cross country practice was canceled twice. Still, I jogged in the sweltering summer heat for upwards of 30 minutes nearly every day to keep up with my training.

Swallowing felt like a knife pricking at my throat, and I only got through each run by imagining the temporary relief that water would offer.

That was, until I discovered an unexpected remedy for my perpetually parched throat: cucumber.

Cucumbers are 96 percent water and thus commonly used for their hydrating properties, from relieving headaches to alleviating puffy eyes. They are also a plentiful source of potassium, an electrolyte that attracts water and nutrients into cells. However, there are other theories as to why they act as panaceas for dry throats.

The Five Elements theory of Chinese medicine relates water, wood, fire, earth and metal with the seasons, each of which corresponds to an internal organ. Dry weather combined with autumn, the season corresponding to metal, indicates a time for healing the lungs, nose and skin.

While cucumbers have been noted for their detoxifying properties, other foods purportedly clean, hydrate and heal the lungs. Loquats and figs are known to relieve cough and nourish the heart and lungs, and pears are said to be a cure-all. In fact, many Asian countries like China use loquats as the key ingredient in cough drops and syrups.

Once I discovered the soothing superpowers of cucumbers, I started eating them on a more regular basis of three to four per week. With the addition of an average daily intake of six glasses of water (or 48 ounces) ensured by a water bottle at my desk, my throat didn’t feel as dry as it had been mid-August.

In addition to a parched throat, the smoky air also induced coughing, much akin to the regular coughing fits I used to have every winter.

In the past, I tried various prescriptions from doctors as well as remedies my grandmother swore by — which I mostly enjoyed for their sugary taste — but none seemed to work until my grandmother began boiling pears for me every other night. Gradually, my coughs got better until they disappeared about six years ago.

Other household remedies have proven to be just as effective. Honey, for example, is one of the most widely used ingredients in cough drops, and for good reason — it’s a natural cough suppressant and its soothing texture helps relieve a sore, itchy throat.

In terms of beverages, green, lemon and grapefruit tea all detoxify blood, relieve cough, reduce phlegm and nourish the lungs. Known as one of the most hydrating beverages when consumed in moderation with one to two cups per day, green tea also helps to prevent cancer and lower blood lipids.

Personally, I have found lemon tea and several nighttime teas, including chamomile and green tea, to be incredibly effective in quenching thirst and helping with relaxation. Their benefits are noted to extend far beyond the placebo effect of calming tea time rituals.

Regardless of whether you believe in them or not, these treatments have withstood the test of time and are worth giving a shot, especially if you plan on going outside. Alternatively, invest in a treadmill.