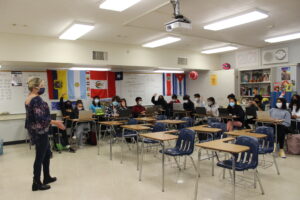 On the morning of Sept. 4, assistant principal Matt Torrens found himself hustling to Social Studies teacher Todd Dwyer’s 2nd-period World Geography classroom. Twenty minutes earlier, he learned he would be needed as an emergency substitute teacher for this class.

In his more than 20 years at the school as both a teacher and administrator, Torrens has never seen such a shortage of substitutes, and he and other staff members are having to fill in when the regular classroom teacher isn’t able to come to class because of sickness or other reasons.

“Due to COVID, many schools across the country have experienced the lack of people who are able to substitute,” Torrens said. “This is mainly because they don’t want to go into a school with thousands of kids that they don’t know.”

If the school can’t find a substitute, the admistristration asks other teachers in that department to fill the role. Since they are more likely to know the material for that class, they are considered the next best alternative to a sub. If they fail to find a department sub, the next best bet is another teacher on campus who doesn’t have a class during a given period.

Administrators and other staffers are the third line of defense and sometimes have to step in and try their best to follow the teachers’ lesson plans.

“The problem is not our teachers, because the teachers are very organized and very well planned,” Torrens said. “If they know they’re going to miss their class, they make sure to write the instructions, which are usually amazing. The problem is we just don’t have a pool of people we can call.”

In order to combat the problem, Torrens and the administration have been looking at options to increase their access to substitutes.

One possible solution, according to Torrens, is to attract substitutes with a higher salary rate, which the district is actively working on. Currently, the Los Gatos Saratoga Union High School District (LGSUHSD) pays $175 per three block period day. This is less than Fremont Union ($200) Campbell ($210 during the pandemic), Los Altos-Mountain View ($180) per day and Palo Alto ($185).

“Per day, that’s not a lot of money, so we’re pretty competitive,” Torrens said. “However, our district has seen that we need to increase our competitiveness, so they’re going to put a proposal together to try to raise our sub salary.”

The district is also reaching out to retirees to see if they would be able to. These retired teachers are sometimes open to substituting these classes, many of which they have taught before. According to Torrens, the district is paying the retirees a higher rate; it is a better alternative to usual subs because they know the campus, the software and the curriculum of many classes.

An alternate idea the district is looking into is hiring a permanent roving substitute. This person would be available to sub on campus on a daily basis.

“We are still looking for ways to get a bigger pool of substitutes,” Torrens said. “Right now, there is a higher chance than usual that a teacher won’t be able to find a substitute, and we are hoping to reduce that as soon as possible.”