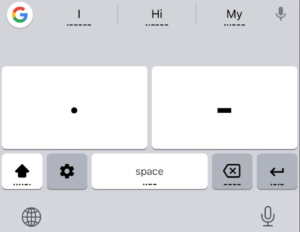 Permalink
Morse code, a method of communication that uses dots and dashes, allows for secret and non-verbal messages.

That translates to “This is Morse code,” a language composed of dots and dashes or bips and beeps. It was created by Samuel F.B. Morse in 1838, a painter who wanted  to create a faster way of sending and receiving messages after learning that his wife had died, only to arrive with her already buried.

Although messages can now be sent at much quicker rates through instant messaging apps, learning Morse code can still be a fun and rewarding process. You can write secret Morse code messages on a piece of paper to give to your buddy that can’t be decrypted by a teacher in case they intercept it. Thomas Edison, the most prolific inventor of all time, taught his wife Morse code so he could tap his finger on her palm to secretly communicate with her.

Morse code also allows you to become a better Ham Radio Operator, if you are one. With dots and dashes taking far less power than a voice message, you are able to send messages farther than you could with your voice. This is eventually what led me to start learning Morse code.

The first way that most people are introduced to learning Morse code is by plain old memorization. At first, it might be hard since Morse code is arhythmic, but there is actually a pattern hidden in the way Morse code was created. The most commonly used letters have fewer dots and dashes compared to less commonly used letters. For example, “E” and “T” are the most common letters in the English alphabet, so they are the shortest. “E” is just “.” and “T” is just “-”.

This method, although the most intuitive, is rather ineffective when sending messages in Morse code back and forth, as you’d have to jot down the tree of letters every time you want to decipher a message.

The way that I learned Morse code was through mnemonics, or adding a line of sound to each letter. For example, “C,” which is “-.-.”, I remember as CAREless CHILdren, emphasizing the dashes and adding a break between the syllables. This way, I am able to translate messages as they are coming to my ear in real time.

It took a long time, but eventually, I was able to get to the point where I could convert messages to Morse code and vice versa — but extremely slowly. Using all the folds of my brain, I could just about translate two words per minute, shy of my goal of 15 words per minute.

My progress eventually halted, until a classmate told me that Google’s keyboard app allows me to type on my phone in Morse code.

I started using Morse code anywhere I could in order to improve my speed, typing in the car, during school and on the toilet. Eventually, I got to the speed where I was able to think of a word and type it out simultaneously. No longer would I have to spell out each letter of a word and then think about its Morse code translation.

However, reading Morse code was still a challenge, as I only worked on translating from English to Morse code instead of vice versa. Still, it was fun seeing my friends’ reactions as I typed using the Morse code keyboard on my phone. At first they would be confused, not knowing what I was using to write out my sentences. Eventually, they would slowly piece two and two together, remembering which language consisted of two characters.

Learning Morse code is still fun and rewarding even though people can now send messages at the speed of light. Better yet, I will have a way of being saved if I’m being held captive and my only way of communicating to the public is through blinking, like how during the Vietnam war, an American POW escaped imprisonment by blinking “TORTURE” in Morse code while being in a Vietnamese propaganda television program.