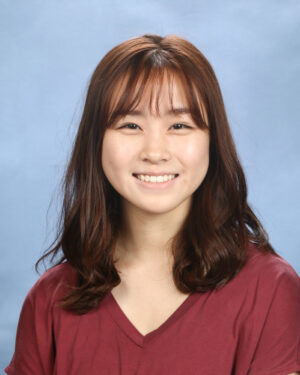 As a person who’s terrible at using her hands, I hardly ever wear makeup to school. The most I can attempt is a chunky layer of mascara, before I unintentionally rub my eyes and smear the black stuff all over my face.

So, that’s why I asked my friend Lily Jiang to do my makeup for a day.

During tutorial on a Monday, Lily put eyeliner, mascara, eyeshadow and lipstick on my face.

Before she did my makeup, I was worried that the makeup would look too thick. As someone who only wears makeup for performances and formal occasions, I’m used to overly-red lipstick, layers of foundation, and thick eyeliner, but as soon as I saw myself in the mirror, I actually really liked the way the makeup accentuated my features. It seemed natural, not like the dramatic makeup you see on television or movie posters.

Unfortunately, having so much product on my face took some getting used to. I tried not to touch the makeup, but at times, it was really inconvenient. When I had an itch in my eye, I had to fan my eyes instead of rubbing them, and during lunchtime, I had to make sure that my lipstick didn’t come off while eating.

At first, I was worried that my friends would find my makeup weird, but as the day went on, I gradually began to feel more confident. I realized that not only can makeup transform your face, but it can also provide an extra boost of self-esteem, which I found was the greatest benefit of wearing makeup.

Throughout the day, a lot of my friends gave me compliments, and some people were surprised that I could look so different with just a little eyeliner and lipstick. Even I was in awe that some color on my face could change my look so much.

Nevertheless, having Lily do my makeup has been a great experience, and I might even wear more makeup to school in the future — with some more practice, of course.