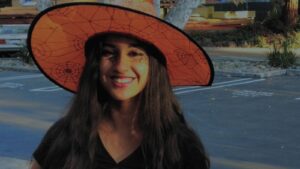 Red and golden leaves, crisp air, coziness and an abundance of pumpkin spice aren’t the only things that make autumn my favorite season. Fall brings back a unique nostalgia because it is the season that welcomed me to the United States when I moved from India three years ago.

Having lived in India for the first dozen years of my life, I had never experienced fall before 2018: Warm summers quickly turned into damp monsoons, leaving no space in between for autumn.

When my family moved to Saratoga in September 2018, we caught the last month of summer before the chill of autumn set in. As the air began to get colder, the leaves started to fall and Bobby Picket’s Halloween classic “Monster Mash” began playing on repeat in various places, people began excitedly talking about things I had never heard of, rituals like pumpkin spice lattes, Thanksgiving traditions and Halloween decorations.

Sure, I had eaten pumpkin before, but never in a dessert or a drink. And while my apartment building in Bangalore had attempted to create a Halloween experience for kids, it mostly consisted of a group of four or five kids dressing in the same stale costumes every year and ringing the doorbells of disgruntled old people. The mood in the air wasn’t one of the excitement and thrill of the Halloween spirit, but rather one of reluctance.

Halloween in the U.S.was nothing like what I had known. Never before had I felt so foreign, like an outsider to such irrefutably American traditions like decorating one’s house for trick-or-treaters, carving pumpkins, obsessing over candy or creating elaborate costumes. While I found myself enthralled by the fall traditions that surrounded me, the uncomfortable feeling of otherness felt nearly impossible to overcome.

Things didn’t feel like they would change until one day, about a month after I moved here, my parents took me and my sister to Queens Pumpkin Patch on Saratoga Avenue. I must have been the oldest kid there, since most 7th graders had already exhausted their childhood fall fantasies of pumpkin patches, cotton candy and petting zoos when they were 4 or 5.

Looking at the diverse array of pumpkins and taking hesitant bites of cotton candy, I felt the excitement of fall envelop me. Sensing warmth despite the cold air was a magical feeling. I realized that this was the first truly “American” experience I had had since moving.

Autumn in the pumpkin patch was the first connection I felt to the strange new world I was now a part of, the first thing I had experienced that made me feel American. I understood that it wasn’t as monumental for most people, but it felt like I was living a small part of an American childhood I had never experienced. I was surrounded by such indistinguishable symbols of Americana, enjoying something most kids my age were well over.

That evening, I felt a strange sense of peace as I allowed myself to enjoy all the quintessential elements of fall. Before I knew it, fall quickly became my favorite season. I was excited, and a little more prepared, to settle into my new life.

I am now entering my fourth autumn in America now, and the fondness I have for this wonderful season has not diminished. I look forward to foggy mornings, vanilla candles, warm Thanksgiving meals, beautiful orange leaves and Halloween spirit. But most of all, fall is truly special to me because it gives me a sense of comfort and belonging born from a time of uncertainty and loneliness when I was new to this country.