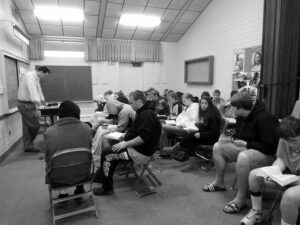 It’s 5:15 a.m. on a Tuesday and sophomore Hannah Hulme is already awake, before the sun, as usual.

It’s 5:15 a.m. on a Tuesday and sophomore Hannah Hulme is already awake, before the sun, as usual.  School doesn’t start for hours, but Hulme has a busier morning agenda than the average teenager.

Still wearing pajamas, she enters the Church of Latter Day Saints on Allendale Avenue for an early morning seminary with her cousin Michael Cole.  The two enter a small classroom in the church and are greeted with sleepy hellos and yawns from other high school students who are waiting for the seminary to begin.

As devout Mormons, Hulme and Cole attend an early morning seminary from 6 a.m. to 6:50 a.m. each weekday.

“I like [the early morning seminary] because you learn more about what happened in the Bible,” Hulme said. “Sometimes I’m really tired, but I think it’s worth it because it’s always interesting.”

For Hulme and Cole, Mormonism plays an integral role in their daily lives.

“Being Mormon has made me want to choose [to do the right thing], make good decisions and just be a good person and serve others,” Coles said.

Hulme said the religion often helps her through tough times and always makes her feel better.

“There are times when I have a stressful night and if I just keep praying and going to church, I know that it helps me through it,” Hulme said.

While Cole and Hulme make their way to their seats in the back of the classroom, teacher Timothy Henry, known to the students as Brother Henry, greets the class warmly.

After the morning prayer, Brother Henry begins the seminary by listing the attendance record of each student. He said the Church recommends that high schoolers complete the seminary course with at least 80 percent attendance, but it is not mandated.

“I guess, more than anything, it is just to demonstrate your dedication to the Lord,” he said. “We believe that starting the day off with Scripture study, with prayer, can only help people go on to school with the different influences and peer pressure that come their way.”

Brother Henry explained that the day’s lesson was on hypocrisy.

“Hypocrites go to church, put on a façade and don’t live according to the church,” Brother Henry said to the class.

Hulme nodded in agreement, commenting that “[some people] say they’re Christian, but they don’t even go to church.”

After reading Luke Chapter 11 in the Bible, Brother Henry explained that Jesus disapproved of the hypocritical behavior of the Pharisees.

Applying this lesson to their everyday lives, he said, “We cannot fool God. I know he watches us and expects a lot of us.”

To end the lesson, Brother Henry expressed the importance of reading the Bible.

“I am grateful we have gospels as examples for ourselves,” he said. “Jesus is our savior, Amen.”

Life as a Mormon

In addition to their frequent church attendance, Hulme and Cole both follow strict rules mandated by their religion. For example, they are prohibited from doing drugs, drinking alcohol, smoking, swearing and engaging in premarital sex.

“We know [when something] is not the right thing to do,” Cole said. “Everything the church tells [you] to do is to protect you and to keep you safe, so it’s easy to follow stuff like that.”

Hulme added she also follows some less obvious rules such as never drinking caffeine or coffee and always dressing modestly. Although many teens would be frustrated by having to adhere to such stringent standards, Hulme does not mind.

“It’s not that big of a deal,” Hulme said. “I can wear a short-sleeved shirt instead of a tank top.”

Hulme and Cole also said that they have never dated anyone, since the church recommends not to date before age 16. Additionally, both have never attended a high school dance.

“It’s sort of up to the person on how much you feel like it’s the right thing to do,” Hulme said. “I’ve never been to a high school dance because I know it gets inappropriate and I wouldn’t feel comfortable there.”

For Hulme and Cole, their parents strongly influence their adherence to church rules.

“It’s probably a factor that plays into it, that my parents are pretty strict and they don’t want me to do [things that are prohibited by the church],” Cole said. “I probably wouldn’t be as strict without their influence.”

However, Hulme said regardless of her parent’s influence, she would still adhere to the strict standards.

“If I had never known about the church, I don’t know if I would have [followed all the strict rules],” Hulme said. “But I’m grateful that I was [introduced to the church] because then I can go to church and know about it. Knowing now what I know, I would probably still [follow strict standards].”

Although the church and her parents have a strong influence on Hulme, she said that ultimately she is the one who makes the decision to follow these rules because she believes it is the right thing to do.

Hulme said most Mormons reside in Utah, and Mormons here in the Bay Area are a minority. She estimates that no more than eight Mormons attend Saratoga High.

Hulme said that people often make jokes about Mormons and stereotype the religion, including the misconception that mainstream Mormons still practice polygamy.

“Whenever you say you’re Mormon, people say ‘Oh, so how many moms do you have?’ And it’s like, ‘Uhhh one, I only have one,’” Hulme said. “That’s not really offensive, but it sometimes gets annoying because they don’t understand that [polygamy is] not in practice anymore.”

Hulme added that she sometimes feels left out of activities or conversations that she does not feel comfortable participating in.

Additionally, Hulme said conflicts sometimes arise when her friends invite her to parties on Sundays. Because  Sunday is the Sabbath Day for Mormons, they are not supposed to go out of the house or work on that day.

“If my friends have a party on Sunday, I really want to go but I know that it’s better not to,” Hulme said. “Even though I’m sad, I know it’s the right decision.”

In light of the recent presidential election, both Hulme and Cole said their families voted for Mitt Romney, the first Mormon to be nominated for the presidency by either party.

Although Cole said that Romney’s religion had little to do with his family’s decision to vote for him, Hulme said Romney being elected could have helped promote Mormonism.

“[If Romney had been elected], it would get people more exposed to Mormonism,” Hulme said. “But if he [didn’t] please the country, hopefully people wouldn’t look at [Mormonism] as a bad thing.”

Hulme also said some issues such as gay marriage and abortion have caused controversy, especially within religious communities. Hulme said most Mormons, including herself, oppose gay marriage.

“I oppose [gay marriage] because you can feel [homosexual], but I don’t think people should carry it out. I don’t really know how to explain it,” Hulme said. “Mormonism doesn’t really prohibit gay marriage. They word it in a certain way where they don’t look down upon you if you are having those kinds of feelings, but they try to recommend not to.”

Both Hulme and Cole said they plan to practice Mormonism for the rest of their lives, and hope that their children will go to church as well some day.

In order to help make that dream a reality, Hulme and Cole said they aspire to go to Brigham Young University. BYU is located in Salt Lake City, the most populated Mormon city in the world. According to the school’s website, 98 percent of students  who attend BYU, including Hulme and Cole’s older siblings, are Mormon.

As a result, Hulme said BYU would be the best place for her to feel accepted.

“People always struggle when they grow up in a place that’s not very Mormon, like here, because you’re a minority,” Hulme said. “I think [at BYU] everyone has a lot of fun because they are all with people like themselves so they can fit in.”

Cole added that BYU would be the ideal place for him to meet a Mormon who he could potentially marry.

“It’s probably going to sound weird — but the main reason why I want to go there is because I want to find a wife, a good wife who is Mormon,” Cole said. “I think it would be hard to find someone who is really good as a wife that doesn’t practice Mormonism.”

Both Cole and Hulme agreed that being Mormon and having different standards has had a huge impact on their lives.

“[My religion] helps me want to be the best person I can be by being kind to others around me,” Hulme said, “and I know that if I make the right decisions, it will pay off someday.”