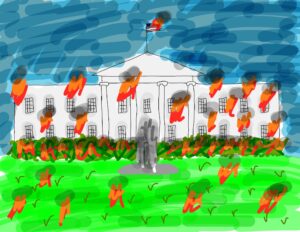 In the past few years, the U.S. has rediscovered the power of youth voices. From March for Our Lives to Black Lives Matter, teens have made their voices heard in ways that harken back to the Civil Rights and anti-Vietnam War movements of the 1960s.

These actions speak volumes against the stereotype that teenagers don’t understand politics. But it also begs the question: why are children and teenagers leading reform while adults stay on the sidelines?

It’s time that more adults join the fray. Many teens will always continue to fight, but it’s time we’re allowed to march behind our adults, not in front.

President Donald Trump is one of the most divisive presidents in American history. Under his administration, tensions in the U.S. have reached an all-time high, and mass demonstrations on a multitude of issues have rocked the country to its core.

While some may dismiss these movements as part of the political divide, these demonstrations are rooted in more than mere partisanship. The Trump administration has consistently fought ideas popular with the majority of Americans: racial equality, gay marriage, climate change and gun safety, to name a few.

Despite all of these assaults, many moderate adults have largely ignored and, to an extent, enabled these actions. Everyday Americans, the plurality of which, according to Gallup, are independents, have continued to treat 2020 politics as normal.

But modern politics is anything but the usual. The Republican-led Senate has joined the president on his many tirades against human rights and safety. The Democrat-led House has been weary to stand in solidarity with activists, urging the country to instead work together and compromise over equality.

As a result, teens have taken action in their own hands. The students of high schools affected by gun violence organized the March For Our Lives, a mass demonstration in support of gun control. The March For Our Lives Action Fund has helped defeat 46 National Rifle Association-backed congressional candidates and register 50,000 new voters.

Countless high school students also led demonstrations for #BlackLivesMatter, Pride and Women’s marches, all of which have led to new equality legislation across the country. Greta Thunberg, a 17-year-old Swedish activist, continuously skipped school to stage mass protests to educate about climate change. Her protests created the “Greta Thunberg-effect,” a term coined by British regulator Ofcom due to the record climate awareness created by her movements.

The country’s reliance on students to voice concern is problematic. While students can take to the streets just as well as any other demographic, they simply aren’t the majority of America, and many cannot vote for the change they want to see. For real change to happen, students need the support of independent adults. As Thunberg said at a news conference during the COP25 conference, the younger generation “can’t go on like this.”

Everyday adults of America need to stand up for the basic principles of society and ensure a safe future not just for their children, but for themselves.

Under the Trump administration, Black Americans have continually faced racial injustice, be it from their own police or the workplace. LGBTQ+ marriages and women’s reproductive rights are now at risk due to the confirmation of Justice Amy Coney Barrett to the Supreme Court. Unprecedented wildfires in the West and hurricanes in the Southeast are wreaking havoc, yet half the nation still doubts the reality of climate change. And mass school shootings are followed by insensitive support of the Second Amendment.

Students understand that these violations of a democratic society put our future at risk. It’s time for adults to join, legitimize our fight and enact change.

The election of president-elect Joe Biden and vice president-elect Kamala Harris may seem like a reason to sit back, but it’s not. At least 73.8 million Americans still voted for President Trump and his destructive agenda. There are still far too many adults sitting on the sidelines.