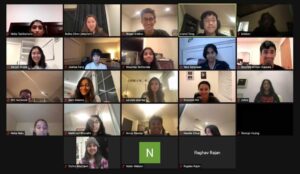 Photo by Selina Chen
Members of the Model UN club smile for a group picture after their first online meeting.

When senior Selina Chen, president of the Model United Nations club, entered Spanish teacher Allison Dermont’s room during a Monday lunch to host the first meeting of the year, it was filled with new, eager participants.

The club has quadrupled its membership since before the pandemic. The officers — Chen, juniors George Huang (vice president) and Shaan Sridhar (secretary), and sophomore Sanjoli Gupta (head delegate) — are excited to kick off the season with a booming group of 42 members.

Model UN allows participants to gain different perspectives to create an informed discussion on global issues in competitions with other schools. From analyzing Panama’s perspective on diplomatic protection to role-playing as the United Arab Emirates in a mock cyber security crisis, members of MUN get the chance to debate and advocate for other countries with their peers during discussions.

To make attendance as streamlined and as accessible as possible, the officer team has implemented a hybrid meeting system where members can meet on Zoom or in-person. There are weekly online meetings at 9 p.m. on Monday via Zoom and bi-weekly in-person meetings, which occur every blue Monday in room 407. Currently, the club hosts interactive Kahoot!-like games to review competition basics and plans to do a mock run-through of what a conference may look like for new members.

“Online meetings are used to figure out the business aspect of Model UN, while in in-person meetings we have more fun,” Chen said.

This year, Chen is hoping for Model UN club to attend virtual versions of the Stanford, Yale, North American International MUN (Georgetown), Santa Clara Valley, Berkeley and Cornell conferences. However, if Stanford decides to host its November conference in person, the club hopes to attend with all of the new members.

“We want new members to be able to work the club around their needs, so that when they attend their first conference, they’re able to perform exactly how they wanted to,” Huang said. “It’ll be amazing to see everyone at the first conference.”

Whenever the club attends conferences, they usually start preparing weeks in advance. Three weeks before the conference, the Model UN team receives assignments from the conference’s host chairs, or supervisors who dictate the pace of the conference. Assignments include the committee type, like the General Assembly, Security Council, Economic and Financial Affairs Council, the committee session topic(s) and the country each delegate will represent. Delegates are expected to find sources to write position papers, essays that describe the stance a country has on a position. They also write opening speeches based on the same stance.

“Preparation is largely up to the individual,” Chen said. “If a member is really dedicated, they will pour hours into it to get an award or learn a lot from the preparation process.” Other members can put in less time and still gain valuable skills, she said.

In Chen’s freshman and sophomore year, the Model UN team was not as active, with attendance averaging around only seven and attending only four conferences. Yet during the pandemic, Chen found that the Model UN team could go to six conferences, more than it ever has in a year, because the online fees were lower and conferences didn’t require the team to get chaperones, enabling more members to participate and win.

Huang said that many of the skills used in Model UN are pivotal in terms of communication outside of school, especially when working in teams.

He believes that Model UN significantly improves participants’ awareness of world events. Writing and speaking at conferences builds public speaking, researching and analytical skills, all of which are instrumental in the workforce, he said.

“It’s easy for us as citizens of the world’s most powerful nation to look at international affairs from only the American perspective, but that’s excluding the majority of the globe,” Chen said. “Model UN trains you to put yourself in the shoes of other nations and reach consensus despite your differences.”