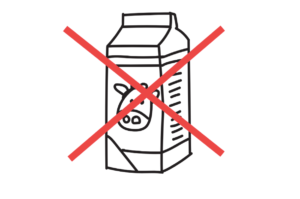 At age 3, I happened upon the culinary tragedy that is milk. However, after only a taste, I was smart enough to realize that milk is an absolutely terrible drink.

Its appearance is the catfish of the century: The creamy white appearance manages to look unabashedly innocent, hiding an awful taste. I still remember the first time I eagerly tried the pearly concoction, only to later spit it out.

I would classify the flavor as a hopelessly confused middle ground between sweet, sour and savory: an awful combination. It boasts a terribly short shelf life, spoiling in a meager week so that its victims end up pouring sour cottage cheese in their cereal instead of milk. (I’ll save cottage cheese for another day: It’s another disgusting invention.)

And then there’s the texture. The few times I’ve been in the unfortunate position of drinking milk, I’ve found a thick skin on top of the drink, which looks nearly as disgusting as it tastes. Or even worse, on the rare occasion when I’ve bought a milk carton, I’ve found whole chunks of suspicious, unknown solids interspersed throughout the milk.

Lastly, there’s the whole issue of being lactose intolerant. While I myself am not, I would think that 65 percent of the world population is unable to digest dairy speaks for itself. Why continue to drink something that we clearly are not designed to consume?

I will never understand how parents, mine included, have the audacity to lie to their kids about the benefits of drinking milk. As a child, I was bullied into thinking that I would stay the height of a 4-year-old for my entire life if I didn’t force myself to drink gag-inducing milk every day. I’ll probably never forgive my parents for that.

A big question still remains: Why and how humanity ever decided to start drinking it in the first place? I have yet to find another example of animals drinking the milk of another species, and every time I try to justify it to myself, I draw a blank. Milk lovers, if you still exist, please clear up my confusion.