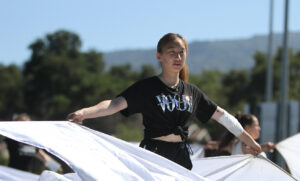 Color guard has been hard at work under the guidance of a new coach.

With preparation for marching season in full swing, members of the band are hard at work preparing their field show for upcoming tournaments and football games.

The show, titled a “A Dream Within,” reflects the changes in thoughts and imagination that people undergo as they age.

“When you are a child, you have wondrous thoughts, but when you grow up, you lose your sense of imaginations,” band director Jason Shuian said.

During the composition process, Shiuan had difficulties uniting the musical ideas he wanted under a single concept. His initial theme idea was “wonder,” but after revisiting the music, he decided to focus the concept on dreams instead.

These aspects of the show should illustrate a “regaining [of] a sense of imagination,” Shuian said.

For senior drum major Deyshna Pai, the change of the show’s title from “Wonder” to “A Dream Within” is not a complete rewriting of the show but rather just a refitting.

“I don’t think the theme [of ‘wonder’] was scrapped, but [rather] the show title was just changed because there still is a mystical, mysterious, and fantastical element to the show,” Pai said. “[These concepts] are better articulated with the new title ‘A Dream Within,’ emphasizing how surreal and fabricated everything feels.”

In contrast to last year, choir is not participating in the field show this year. Last year’s props, which were donated to SHS by the Concord Blue Devils, were sold to a Kansas band.

To aid in the show’s progress, the band made changes to the Color Guard and battery percussion staff.

Because of Legaspi’s past experience, the change from Kidd to Legaspi has been relatively smooth, Shiuan said.

“We’ve been able to work really well together and make it a seamless transition,” Shiuan said. “[Legaspi] is an integral part of how the show progresses.”

The change in guard staff was paralleled in the battery with the elevation of the battery instructor, Sean Clark.

Clark had previously worked with the battery during the winter percussion season, but this year he stepped up as the primary instructor for all of battery, guiding drummers through music and the show.

Shiuan said that the addition of Clark was another effortless shift, with “Clark diving right into work with the percussion students in the battery.”

Shiuan looks forward to seeing the new staff members impact on the program and on the students and hopes that their work with the band will create a lasting legacy for the program.

Pai echoed Shuian’s comments on the changes in staff, praising both the transition and the newcomer’s skills.

“They’re just awesome people who are really good at what they do, so our program is in good hands,” Pai said.

Though the band has historically done very well at competitions, Shiuan has goals beyond just trophies and first place.

“As we grow older, we have expectations that box us in, for better or for worse,” Shiuan said. “I’m hoping that the students are thinking more and being more introspective about not having to be the prescribed person, and being able to rediscover their imagination.”