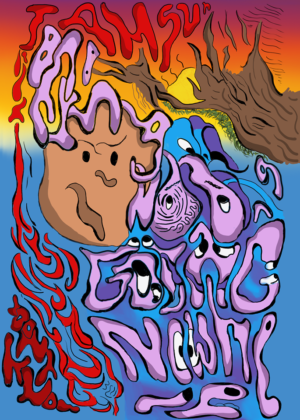 2019 alumna Hannah Chang remembers standing on a sidewalk in the science wing in December of 2018 and looking at the wall in front of her. After months of grueling work and many buckets of paint, she had finished the mural before her, one depicting Earth and outer space, decorated with various organisms and vivid colors.

Chang completed the mural as a part of a 20 Time Project in her Anatomy and Physiology class taught by Kris Orre. The 20 Time Project is an assignment in which students use 20 percent of their class time to work on an independent project that has some relation to the class.

According to US News’s 2019 Top 100 STEM schools, Saratoga High ranks 18th top STEM school in the U.S., but a substantial number of students have little or no interest in these subjects and seek different paths at the school.

Chang, who currently studies at the prestigious Rhode Island School of Design (RISD), knew that she wanted to focus on art since middle school.

Because of this mindset, she wasn’t deterred by outside pressures to conform to the STEM stereotype.

“I did feel pressured to do well academically like my friends and classmates,” Chang said. “But it wasn’t too much of a bother since I knew I was going to follow an art route.”

Laura Chaland, a 2018 alumna who currently studies Graphic Design at the California Institute of the Arts, a private university in Santa Clarita, grew up surrounded by artists, with her grandfather as a painter, her uncle as a tattoo artist and her mom studying art therapy.

“I’d say the STEM side of the Bay Area influences my art style, and not in any negative way,” Chaland said. “I was more inspired to combine technology and art together, hence why I chose graphic design. I’m currently focusing on motion graphics and VR Design, which is a lot more technical than the fine arts.”

Along with creating pieces for class, Chaland also does freelance work on Fiverr, an online market for freelance services, mostly creating album covers for independent SoundCloud artists and friends as well as short animation loops.

While many seem to believe that majoring in art is easy, that is far from the truth.

In fact, according to Chang, the everyday schedule of art school is rigorous and packed with time-consuming, puzzling assignments. Art students regularly stay up late to finish multimedia graphics or canvas paintings. Chang often finds herself pulling all-nighters to finish arduous projects; she mostly works with paper cutting, gouache or watercolor, but sometimes does projects with wood or conte, a hard grease-free crayon.

“Even though we don’t need to study for exams, we still have critiques for every project we do, and each project is very time-consuming and labor-intensive,” Chang said. “I feel like the effort we put in equals the amount of effort put into STEM majors.”

Class of 2019 alumnus Usman Khan, who is majoring in Arts and Entertainment Technologies at the University of Texas, said he has a busy schedule and work-packed weekends before a major project is due. As another student who is currently focusing on digital art, Khanr focuses on creating pieces that can be viewed online for companies or groups, like logos focusing on a brand’s aesthetic.

Khan became interested in the fields of graphic design and digital art when he switched into the school’s Media Arts Program halfway through his sophomore year.

“For me, what I do is a way to stamp my personality onto my work, which I’m not sure is the case for other professions,” Khan said. “Digital art is a really pure form of problem-solving because there’s never a set way or set method to create something, and even that ‘something’ can always be changing.”

Art also attracts practitioners because of the creative freedom it provides.

“The two biggest barriers to people striving to be artists are money and outside perception,” Khan said. “With outside perception, nothing anyone says can affect how well you as an individual perform. Living in Saratoga, we are blessed with a really high foundational educational building block that sets us up for success regardless of if we choose STEM or art.”

Khan also says that his supportive parents played a big role in his decision to major in art and that humanities and STEM fields may be more interconnected than people think. Despite the stereotypes and misconceptions related to two seemingly different career paths, he believes that success is not set in stone and one can find it regardless of whatever profession they choose to pursue.

“If I tell someone that I do art and they say something like ‘have fun being nothing in life,’ they can’t actually affect the outcome of anything I do,” Khan said. “I guess that ties back into STEM vs. arts. They’re just two different paths in life that different people take for their own reasons and that makes no one better or worse for it. ”