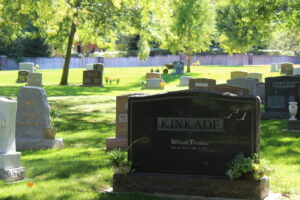 Driving through to Madronia Cemetery in the Saratoga foothills, AP U.S. History MAP teacher Matt Torrens began telling us about history of downtown Saratoga. What was once supposed to be a tour for the cemetery turned into an insightful lesson of the city’s historical relevance.

Eyes bright with eagerness, Torrens entered through a red brick arch that framed the the cemetery’s park-like interior.  Among the well-kept grass and large trees, the tombstones’ shades of gray, brown and white freckle the expansive plots of land. These tombstones, inscribed with symbols and characters from different languages, each encapsulates remnants of a deceased life.

“I tell my students, every tombstone has a story to tell,”  said Torrens, who occasionally gives tours at the cemetery. “These stories are sometimes sad and by looking at the dates you can tell a person died young. Some of them have an Army cross on them, meaning they died in war.”

The 12.5-acre cemetery was established in 1863 as a graveyard for residents of Saratoga following the death of a young boy named C.B. Buckman in 1854.

Though cemeteries are commonly associated with the stereotypical horror movie image of ominous fog and haunting shadows, Madronia maintains a quaint and calming atmosphere.

“I’ve had people in the business who travel around, like salespeople, say this is the most beautiful cemetery in the whole state,” said Steve Albright, the general manager of Madronia Cemetery.

Today, Madronia not only serves as a final resting place for the first residents of Saratoga, but also of those of later generations and different ethnicities; even the trees encircling the gravestones come from various parts of the world.

For senior Cailley Bryan, Madronia is a place with deep meaning. Both her grandfather and great grandparents were laid to rest there.

“I was really close to my grandpa, whom I called Bopa, and so my mom and I frequently go there to put down flowers and walk around,” Bryan said. “It’s a gorgeous cemetery and they do a great job maintaining it. I’m glad my family was buried there.”

While the cemetery is marked by its cleanliness and serenity, the people laid to rest there are the most fascinating part.

Torrens pointed out that one notable person who rests in the cemetery is Mary Ann Day Brown, wife of famed abolitionist John Brown. After her husband’s raid on Harper’s Ferry in October 1859 and execution later that year, she came to San Francisco and later to Saratoga following her two daughters.

In 1884, Brown was buried in Madronia Cemetery; however, according to Albright, her story still lives on in the “scores of students that come here every year just to see her grave.”

Another historical figure resting in the cemetery is Riley Septimus Moultrie, one of the surviving members of the Donner Party rescue mission in 1847.

“We learned about the Donner Party’s expedition in APUSH MAP and even watched a documentary on it, so it was cool to learn that Saratoga has a small connection to the history we learned in class,” Hussain said. “It was something I never realized until that visit, even though I had visited the cemetery earlier on in the year when my group went to film for our video poem project.”

Torrens said many students may never visit historical sites in their own towns and lose opportunities for understanding.

After all, as Torrens says, “Every community has great stories.”