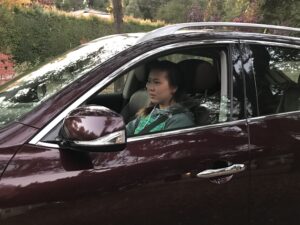 The first time I caused a car to move (I’d rather not disgrace the word “drive”) was characterized by my shaky “uh-h-h-h” from the driver’s seat, my father’s impatient sighs from the passenger seat and my friend’s shrill soprano from the back seat.

It was an overcast day in January, the day before my scheduled session with an instructor, so I figured that I should at least learn how to move the car 200 feet down the driveway in front of my house. Was I successful? In the liberal sense of the word, yes, so technically I now had five stressful minutes of experience in the driver’s seat.

So the next day, when Instructor Lin showed up and asked in gruff Chinese whether I’d driven before, I muttered, “yes but —”

I was cut off by an enthusiastic “Well, get on the road!”

Putting all my trust in the brake under Instructor Lin’s foot, I drove onto Los Gatos-Saratoga Road.

I’m the type of person who always ends up running the race course backwards in Mario Kart because I can’t figure out how to turn around, so I was quite surprised when I survived the two-hour driving session that included a journey in hell — that is, Lawrence Expressway — where I received a lot of glares for going 35 mph. I was also slightly traumatized from running over a dead (I stress, already dead) squirrel.

But despite my trepidation every time I got behind the wheels, I kept asking to drive — admittedly in a wobbly and snail-like fashion — to everywhere my parents or I needed to go. Driving to Westgate myself for the first time to buy a cup of Jamba Juice felt like it ought to be at the top of my accomplishments list in my college applications.

The first time I drove on a highway was the day after the quarantine was ordered last March. Normally, Instructor Lin would have been the one to take me through my first trip on the highway, but my father had other ideas as the roads became relatively empty due to quarantine.

My father didn’t say anything until I suddenly found myself merging onto a highway. Unprepared, I panicked as my head was filled with 65 mph, 65 mph, 65 mph — there was probably also a fleeting thought comparing death by coronavirus to death by car crash.

The trip was a blur, perhaps because my brain was too focused on steering to encode memories. All I remembered was the triumphant grin on my face as I pulled back into my garage without a scratch.

Driving on highways became my favorite activity, especially because of the unofficial “follow the traffic” clause that allowed me to drive at 80 mph when safe. It was a glorious feeling to glimpse the scenery that flashed by in the corner of my eye.

A couple of months into quarantine, my family was dying to go somewhere, so we opted for a trip to Carmel. That day, I learned that 1) not all highways are friendly and 2) I can get sore muscles for being too sweaty and tense at the wheel for a prolonged period of time.

I mean, is there anything more squiggly than Highway 17? Its twistiness trumps even that of instant ramen. Looking back, it was a miracle that I did not hurl my entire family into the welcoming embrace of the redwoods.

I must admit, not dying on CA-17 was what vanquished my fear of driving once and for all.

Armed with the knowledge that I survived Highway 17 — and with stories of my mom’s friend who failed three times — I stepped into my driving exam in July with 50% confidence and 50% nerves. I tried to focus on the former because, hey, you should always look at the gas tank half full.

But the comical exaggerations did get me a “well done” on the exam. Of the 15 points I could have lost and still passed, I only lost one point, which was much better than my parents’ results — and they already knew how to drive in China prior to the American exam. My mom was thrilled and immediately showed off my score to all her Asian mom friends.

So, as 2020 comes to a merciful end, I’m still as enthusiastic about driving as ever because it gives me a sense of purpose and a destination — and because I have something to prove to those who laughed at my Mario Kart skills.