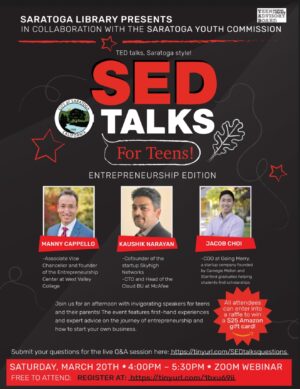 Every other Tuesday, junior Sahil Shaik logs onto a Zoom meeting along with eight other students from the Saratoga Library Teen Advisory Board and the Saratoga Youth Commission to plan for SED Talks, Saratoga’s version of the popular TED Talks series. (This group is unrelated to the Saratoga TEDx club).

The SED Talks organizers, who started meeting in the fall of 2019, focus specifically on planning speaker series targeted at local teenagers with the theme of “Overcoming Obstacles.” While the first talk was set to occur in-person last March, it was canceled due to COVID-19; the group reconvened in early September to launch an online version of SED talks.

After successfully hosting a talk related to overcoming mental health obstacles in early December with over 60 signups from Saratoga students and parents in the community, they decided to steer their March 20 event to a new topic: overcoming obstacles in entrepreneurship.

Although they faced various setbacks in the planning process, the students cherished this opportunity.

“It started off with people simply bouncing different ideas we thought would be relevant to teens, and we thought it would be interesting to see how businesses were affected by COVID-19,” Shaik said. “That was the driving premise in our decision to make entrepreneurship our main topic. Overcoming obstacles was just an overall theme that we thought was relevant to teens in this era.”

According to junior Aditya Venkatram, one of the biggest challenges was finding speakers.

“Two of our planned speakers declined weeks before the event, and we had to scramble to find new ones,” Venkatram said. “Furthermore, communicating with our speakers was also a challenge as, personally, I had to ask my dad to email the speaker I had asked to join, which was very inefficient and arduous.”

Additionally, the group faced barriers in marketing due to the disconnect over social media resulting in low viewership. To combat this, Shaik reached out personally to his non-profit organization, asked his friends to attend and posted a flyer of the event on his Instagram story. Other members posted it on the school’s Facebook group, their own Facebook accounts, their own Instagram accounts and the Saratoga Library newsletter.

“When I posted the SED Talks flyer for this event on my Instagram, I got lots of positive feedback from many of my friends,” Shaik said. “It was quite memorable for me because it showed that I helped bring people into this event by talking about something positive during the chaos of COVID-19.”

Through the challenges, Shaik said he felt he developed multiple skills regarding communication, leadership and strategic marketing through social media. He also enjoyed planning and seeing the hard work from the past year come together. Along with gaining 40 participants over Zoom for this event, the team also garnered over 300 views from their Facebook Live.

“It was rewarding to be able to learn from the speakers because they all had amazing insights and different perspectives,” said junior Michelle Liu, who attends the Harker School and serves as the chair of the Youth Commission. “With entrepreneurship, you realize that once you have an idea, you can turn it into a reality and the world opens up that way.”