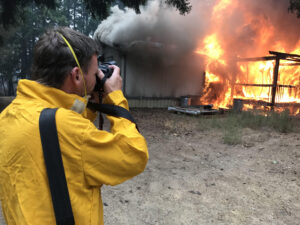 “The best stories I’ve done in terms of impact, comprehensiveness, quality and me enjoying writing the story are almost exclusively when I’ve gone out and met people face to face,” Baron said. “Now, a lot of journalists end up sitting at their desks because we’re doing so much more research online.”

In recent years, the increase in internet and social media usage has changed many traditional methods of reporting, particularly for those working in local newsrooms, due to more focus on online content, revenue challenges and changes in readership.

Baron, who grew up in the Bay Area and earned a master’s degree in journalism from UC Berkeley, has worked in journalism for about 29 years, writing in Canada for 22 years before coming back to California seven years ago and eventually landing a job at the Mercury News.

According to a study in 2018 by the Pew Research Center, 20% of American adults get their news primarily from social media, a number that has not only increased from previous years, but surpasses the 16% of the population that primarily seeks newspapers as a main news source.

To keep up with this change, most news outlets have put a greater emphasis on online content, increasing the pace and flow of stories posted there.

“Breaking news now gets covered immediately, so there’s a race to get things up and beat your competition by a few seconds,” Baron said. “There’s a real risk of putting out inaccurate info because it all happens so fast. One of the benefits of working all day on your news coverage and having it go through a careful editing process [like before] is that mistakes are less likely to happen.”

The new emphasis on online speed has made it harder for reporters to not only engage with the people they are covering, but also maintain the quality of their stories.

“When you’re going and interviewing someone at a location, you’re gathering all these details about what’s around them, the people they interact with and the environment they live or work in,” Baron said. “A big challenge is trying to get that level of detail into your stories when you’re reporting a lot of it digitally.”

General assignment reporter and editor John Woolfolk, a veteran journalist who joined the Mercury News in 1995, noted an even larger structural change within the newsroom.

Twenty years ago, no one showed up at the newsroom before 9 a.m. or 10 a.m. Reporters had one deadline in the afternoon and another in the evening, with people working later hours and focusing on the next day’s print edition.

These days, excluding the unique pandemic circumstances, reporters arrive at work around 8:30 a.m. and finish their stories by mid-afternoon. The night layout and copy editing crew, like the newsroom generally, has only a sliver of the people who used to work there because of the economic hardships in the news business and other trends.

Local newspapers have traditionally relied  largely on subscriptions and advertising as primary sources of revenue. In 2020, however, digital advertising made up 51% of all advertising revenue of the Bay Area News Group, according to Michael Turpin, the executive vice president and chief revenue officer of the company. (He is also the husband of Spanish teacher Sarah Voorhees).

Traditional advertisers in local newspapers have flocked to national publications or tech platforms like Facebook due to their larger audience and exposure, causing smaller newspapers to experience decreasing revenues — often forcing them to file for bankruptcy.

As a result, staff cuts in newsrooms have risen dramatically since the late 2000s. Amplified by the pandemic, nearly one-third of all large news organizations experienced layoffs in 2020.

“Advertisers want to be on the landing page of Google,” said Baron, the Mercury News business reporter. He added: “The Mercury News staff has shrunk and stabilized mostly since I’ve been there, and I hope it’s at the point where there aren’t going to be any more cuts, but the number of reporters and editors is a fraction of what it was 10 or 15 years ago.”

These smaller staffs have caused holes in reporting in communities across the nation. Towns across the country are rapidly losing access to local news as those outlets die out due to an increase in what researchers call “news deserts.” In 2019, the Associated Press reported that over 1,400 cities and towns in the U.S. lost a print newspaper between 2004 to 2019 alone.

Baron has also seen changes in what a bigger paper like the Mercury News is able to cover. Earlier in his career, he had the ability to go much more in depth for the pieces he was writing. He used to be able to drive over an hour to speak to one person and obtain a high-quality interview; now he is expected to make six phone calls and online research in the same amount of time instead — specifically because reporters are stretched so much thinner than in the past. The amount of news hasn’t changed, but the number of people covering it has decreased substantially.

Another consequence of this staffing shortage is a decrease in the number of topics covered by news outlets. When the Mercury News shifted their news operations to focus more on COVID-19, other important topics were uncovered.

“Readers, viewers and listeners need to know what’s happening in their schools, local governments, their transportation commissions and their hospitals. This is the information people need to become effective participants in democracies,” Baron said. “We have such an information deficit about all these important things now, mostly because we as the news media have shrunk and are now focusing on just the key elements of 21st-century life. Tons of other important elements are getting very little of the reporting that they need.”

In order to remedy the decline in local news coverage, small and fully-digital news organizations such as the Milpitas Beat, Santa Cruz Local and San Jose Spotlight have begun filling the holes. Although advertising and circulation of print newspapers have been on a general decline, news outlets’ online presences have enabled them to find newer, innovative ways to continue making revenue.

“None of this is easy. Folks at the [online-only news organizations] will tell you that,” Turpin said. “We actually reach more people with our journalism now than we did when we were print only, but the world has changed dramatically since the internet, mobile phones and social media. None of these things existed when I started working for newspapers.”

Perhaps the most alarming trend accompanying the decline in traditional papers is the number of reporters leaving their jobs.

A study by the University of North Carolina’s Hussman School of Journalism and Media found that the number of journalists nationwide decreased by 50% between 2004 and 2019. Part of this stems from the laying off of reporters and copy editors to sustain a profitable business, but an increasingly prevalent factor comes from burnout in the job and unsustainably low wages.

The average income needed per adult to support a household of four in the Bay Area is $103,080 after taxes, according to MIT’s Living Wage Calculator. The $103,080 calculation does not include conveniences like restaurants dining or unpaid vacations and holidays. However, the US Bureau of Labor Statistics reports that news analysts, reporters and journalists earn an annual mean wage of $82,520 in the Bay Area, about $20,000 less than they would need to support a family.

To remedy this, a larger number of journalists are leaving the industry in search of other better-paying jobs in industries like public relations. As a result, American newsroom employment in general has plummeted 26% since 2008.

The low wages also mean a much narrower pool in the people coming into the field.

“[Some people] are like, ‘I don’t care. I’ll work for peanuts as long as I can write the news.’ And that’s admirable,” Baron said. “But I think you’re also excluding a lot of brilliant people who would do a fantastic job but [shy away] from an industry that doesn’t really pay a living wage and has far fewer benefits than other alternatives.”

The future of print journalism

Despite the challenges newspapers face, both Baron and Woolfolk don’t regret going into the field for their careers, and believe that the industry still has much to offer for young people who are interested in it.

“When I got into the business, everybody was telling us there’s no job, nobody’s hiring and you’ll have a hard time breaking in,” Woolfolk said. “But if you’re interested and like what you do, you’ll get a job and continue to get raises, so don’t let that discourage you. You never stop learning, and there’s always something new.”

Although the scarcity of jobs and low pay are inescapable realities and “your chances of getting rich are very slim,” according to Baron, there’s reason to hope that wages will go up, staff sizes will increase and new business models will take hold.

Particularly promising new areas and forms of journalism, including social media journalists, are gaining much more traction. Having expertise in a particular area like health care, science or technology can be an asset, as can a broad set of skills such as video production or photography.

What’s more, Baron said, is the field’s tremendous importance and its unique opportunities.

Among his most impactful work as a journalist, Baron remembers covering the fires at Big Basin Redwoods State Park in Boulder Creek in 2020 and the role of robots in Amazon warehouses.

“I walked five miles to get into Big Basin with a photographer and we were the first ones to bring photos out of there,” Baron said. “All over the country, people were wondering whether the trees survived or everything was destroyed, and we were able to shed [details] like that. It was just an incredibly challenging and exciting assignment.”

In the robot story, he had the chance to go into an Amazon warehouse and speak with workers whose jobs would be replaced with automation.

“It sort of validated me, being in a career where I could go report on something which really mattered,” Baron said.

Both stories enabled him to gain insights about people and places that most people can’t readily access.

“So many people are fleeing journalism for public relations because it’s a practical life decision, but most people wish that they didn’t have to leave,” Baron said. “It’s fun and exciting in ways that other jobs can never be. It’s so important that smart, dedicated and compassionate people go into this field. If you’re a person that wants to do a job that’s important to the world and serve the public in an important way, you can’t do any better than being a journalist.”