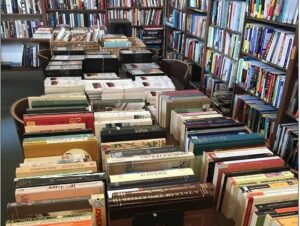 Tucked behind the quaint restaurants, wine bars and cafes lining the streets of downtown Saratoga, customers could get lost browsing the eclectic shelves of the Book-Go-Round, a used bookstore with titles ranging from the markedly familiar to the curiously obscure. Nowadays, one may see a single customer combing through their collection, while a volunteer sifts through one of many boxes of donated books.

Many small businesses have been slammed by the pandemic-induced economic shutdown, and bookstores have been no different: In the first 10 months of 2020, bookstore sales fell 31 percent nationally compared to a year earlier, according to Publishers Weekly.

Coupled with the increasing popularity of ebooks and digital readers, it would seem that bookstores would see a decline in sales.  However, through innovative strategies such as appointment systems and curbside delivery as well as community support, some small bookstores have endured and hope to emerge intact on the other side of the pandemic.

The Book Go Round, owned and operated by the Friends of Saratoga Library, a nonprofit volunteer organization dedicated to raising funds for supporting the library’s enhancements and programs, is an entirely volunteer-run business. However, after shutting down in mid-March of last year and reopening in June as restrictions eased, they couldn’t bring back all their volunteers.

“A lot of our volunteers are in the older realm and so a lot of them could not come back for safety reasons,” manager Kristin Gragnola said. “Some of them live in retirement places that wouldn’t allow them to go out to keep everyone safe.”

In addition to only being able to bring back about half of their volunteers, the store also lost their storage room at the Saratoga Library due to COVID-19 restrictions, but were able to regain access in July. According to Gragnola, this led to further reopening complications, since the Book Go Round had seen an influx of donations during the shelter-in-place as people were cleaning out their homes and leaving boxes of books outside their storefront.

Since the Book Go Round’s inventory consists entirely of donated books, when a book is donated, each volunteer has a certain category they’re in charge of sorting and pricing. Despite not having as many volunteers, those who still could volunteer took up extra shifts to aid in this process.

The store was able to reopen with reduced capacity of two customers at time along with other safety precautions. Customers can schedule 30-minute appointments online so they can avoid waiting in line outside the store.

According to Gragnola, they haven’t had to reduce their hours, but because customers often like to peruse the shelves, it was still a difficult transition to make.

“People come in and they want to browse, they don’t just come in and go ‘Oh I know what book I want to get and I’m going to get it and leave,’ especially with our store where we have lots of different books, but don’t necessarily have every book that’s the newest and greatest,” she said.

Despite the changes, Gragnola notes that the Book Go Round has been lucky, since they are not a for-profit business, they haven’t had to make any significant cuts to staffing or worry about purchasing inventory.

Similar to the Book Go Round, the Recycle Bookstore, an independently owned bookstore with two locations in Campbell and San Jose, is not an ordinary bookstore; the store also buys and trades books from their inventory based on the estimated value of books that are brought in by customers.

One challenge is that the store has also had to limit the amount of time each customer spends inside since normally customers would spend hours browsing, said Lauren Abate, the assistant manager at their Campbell store.

However, they have also expanded to curbside pickups, so customers can email to inquire about specific titles before they come and pay for it in person.

Although the pickup system has been a way to stay viable during the pandemic, Abate believes that it's a sales method that is here to stay. Along with helping to reduce possible exposure, it’s been beneficial for employees, as the store has also struggled with short-staffing. When a customer requests specific titles, it often takes extra time for an employee to track it down.

“As nice as it is to take your time browsing the bookshelves, not everyone really has the time or inclination,” she said. “We now get regular emails with lists of titles people want to buy. With an email, we can take a little bit more time or even check with our other store or our distributor.”

Abate said that Recycle Bookstore has been quite fortunate financially throughout the pandemic. She added that despite initially having reduced hours when they reopened in June, they have been able to rehire all employees who wanted to come back, and have even been able to take on some new ones.

Before the pandemic, independent bookstores had been seeing a slow decline in recent decades due to the rise of the ebook market, with large companies like Amazon and Apple becoming major players. With the market growing, big retailers such as Barnes and Nobles have expanded into ebooks and digital readers.

Yet, with many spending more time at home than ever, Abate and Gragnola both noted that customer loyalty has been strong throughout the pandemic, despite the convenience of being able to simply download nearly any title they desire from online retailers.

“I think the struggle [of the pandemic] hitting so close to home for so many means more customers wish to keep their money local to support the community,” Abate said. “We really appreciate it, because of course it's easier buying something with a simple click. On the other hand, having a book waiting here at Recycle might give people a much needed reason to get out of the house.”