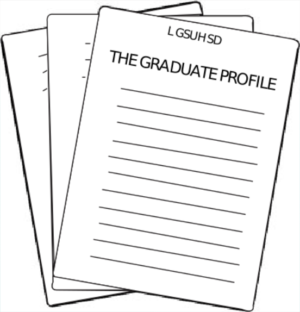 The Graduate Profile will replace the district’s Strategic Plan as the guide for future education at the two schools.

They were there to begin discussing what a student in the district should know and be able to do at the end of their education, the beginning of a process that will result in a Graduate Profile.

Each of the participants understood the rapid pace at which society was changing with technology and with it the expectations for people living in the society. They also understood that students’ education must be adjusted to better prepare them for it.

The atmosphere was respectful and calm as each person voiced their opinion on what students should learn once they walk away with their diploma.

Superintendent Mike Grove introduced the project at the beginning of the school year and has been instrumental in pushing this vision forward.

Participants on the committee hope the profile will add more structure to what students at Los Gatos and Saratoga High School learn. It will replace the district’s Strategic Plan, which guides the schools and district and helps determine what they spend resources on and will expire in three to five years.

Assistant  principal Kerry Mohnike said she has found the process similar to an educational concept called backwards design, in which teachers determine a final learning goal first and then plan their curriculum accordingly.

“Instead of being taught based on older assumptions of what skills and knowledge are needed for the modern world, the education will be more targeted to the needs of students in the future,” Mohnike said.

To achieve this goal, the district created a committee known as the Design Team with around 50 members, consisting of teachers, administrators and students from both schools as well as business professionals from the community, board members and college representatives.

So far the Design Team has held two of four meetings, the first on Jan. 22 and the second on Feb. 26.

Due to the shelter-in-place order and school closure, the team has halted their meetings for now.

“It's tough to lose the momentum of the work,” Mohnike said. “But I know this pause may force us to rethink even what we went into this work with.  It may even make it easier for us to make the necessary shifts that the group ultimately decides to validate in the new Graduate Profile.”

The Design Team plans to resume its meetings online, holding the last two on April 29 and May 27. They originally planned to finish and begin using the graduate profile for the 2020-2021 school year. They are still hoping to achieve that goal.

In addition to Moon and Mohnike, juniors Manasi Garg and Nora Sherman and English teacher Suzanne Herzman have attended meetings and contributed to the project also outline what the schools should spend resources on and whether shifts in instructional technique are needed.

“During each meeting, we discuss the most important qualities a high school student living in the 21st century must possess in order to be successful in a rapidly advancing world and how we can change the educational system to help guide future generations,” Moon said.

Mohnike said that they have looked at emerging trends in school culture and educational needs and begun figuring out which are the most important.

Since the project is still in its early stages, the team has not yet decided what changes to make and how to make them.

Many of the members have an opinion or an idea of what they want to see in the Graduate Profile. While Mohnike thinks technical skills in subjects like math and English are important, she said she believes the district should also focus on expanding students’ soft skills such as empathy and resilience to help them become more successful.

“I think the power of collaborative work and the essential skills of working on a team are important,” Mohnike said. “The other thing that is becoming very apparent is the value of the arts — creating and appreciating visual and performing arts makes the rest of what we do meaningful.”

To determine what is important to include in the document, the Design Team reviews current and projected trends in the workplace and cultural competencies that companies reported as valuable. The discussions they hold at the sessions help the team make these decisions.

Moon said she hopes to see more of an emphasis on real-life lessons, like financial literacy and understanding how to prepare for a job. With the skills established in the Graduate Profile, students can better succeed in the world after they graduate, she said.

“It is so crucial that this Graduate Profile is established,” Moon said. “With constantly changing technologies, economies, laws and job markets, it is important that the education of future generations is revised as well to keep up with advancing society.”