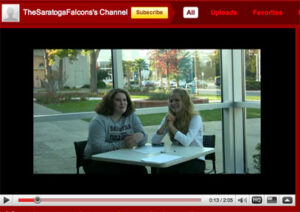 Madeline Rothenberg and Madeline Renalds, "Mad and Mad," deliver information about events on a recent video.

Lack of communication and publicity about on-campus events? Perhaps not anymore. YouTube will soon play a role in raising awareness by informing about school events. The Leadership class, aided by members of the new Multimedia Journalism class (MMJ), is creating a YouTube channel that will provide updates about dances, fundraisers and other happenings on campus. The YouTube channel will consist of a series of newscasts

Junior David Mandell, a member of the Leadership class, said students break up into small groups with one leader to discuss school issues while getting the word out about upcoming events and addressing problems such as school diversity.

The Leadership class has already worked on several projects this year, including the school’s 50th Anniversary celebrations and Challenge Day, to be held in March. Now, they are focusing on becoming more technologically advanced with the new YouTube channel.

“The technological age is advancing, and we’re advancing with it,” said junior Kent Paisley, a member of the MMJ class. Paisley, who was asked to help with the channel, works hand-in-hand with the Leadership class and aides in the technological aspect of the project. He maintains the YouTube channel and edits most of the broadcast segments. Paisley and the members of the Leadership class work on the project after school, as the MMJ class meets during third period and Leadership during lunch.

“Getting the word out was the goal,” said assistant principal Karen Hyde, who teaches the Leadership class. “It was, ‘what do kids listen to and what do they watch?'”

“We want to provide some entertainment and humor to lighten the load,” said senior Maddy Renalds, a member of the Leadership class working on the project. “We’re hoping to raise the school in spirit.”

One video, featuring “Mad and Mad” (Madeline Renalds and Madeline Rothenberg) has already been posted to the YouTube channel.
Both girls talked about school events (upcoming and already happened), charity events and even an Economics class midterm that many seniors were going to take at the time. Within the broadcast are quips and one-liners that are designed to amuse. As of early December, the video had gotten 247 views.

Things did not run as smoothly as hoped the first time around because of scheduling issues in the sharing of equipment with MMJ, but Leadership hopes to work them out and add more people to the project.

“Next time, we hope to have scripts and more people involved,” said Renalds. The next broadcast, to be filmed in December, will focus on college applications, Winter Ball, holiday drives and winter sports.

“We have many things going on in many directions,” said Hyde.

People can access the channel by accessing the following URL: http://www.youtube.com/user/TheSaratogaFalcons.