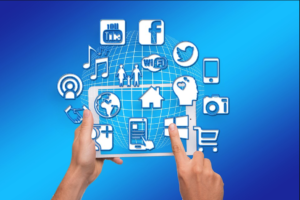 Many parents and students have a negative stigma regarding young children using social media, when in fact, this behavior should be acceptable or even encouraged in modern society.

Most believe that the optimal time to jump on the social media bandwagon is the beginning of high school because they deem teens at this age mature enough to not make a fool out of themselves online.

But we all know this isn’t true. Most of us have made mistakes when we were introduced to social media platforms — whether it was posting an inappropriate comment or sharing an embarrassing story. Making mistakes is a natural part of the learning process.

With that being said, it’s better to make mistakes sooner than most parents would think. This allows younger teens time to adjust their behavior on social media when others are also doing so. According to a report done by Influence Central, students first create social media accounts at an average age of 11.4 — sixth grade — so creating a social media account during middle school as opposed to high school would give more space for students to experiment and make mistakes before the impacts become as significant.

Despite this, many who oppose early usage of social media cite addiction as a major problem. The risk of addiction certainly isn’t unlikely, but instead of fighting this risk by completely blocking out social media until a certain age, parents should enforce clear-cut rules and guidelines that ease students into integrating social media into their lives.

For example, parents can easily set a limit on children's screen times to avoid constant usage, and when their child has demonstrated appropriate levels of self-control and maturity, these limits can be lessened or removed entirely. While blocking social media would be easier to implement, this could actually have negative effects on a child — since they would have no exposure to social media until a certain age, it would be easier for them to become addicted through a feeling of sudden freedom and a desire to “catch up.”

An additional solution would be to emphasize safety online rather than age; young children educated on appropriate ways to act safely online are capable of handling themselves on social media.

What matters most isn’t the exact age when students get social media — it’s how they integrate into the process. As long as parents and teachers instill good habits and teach proper guidelines when introducing children to social media, even elementary-age children are capable of proper social media usage.