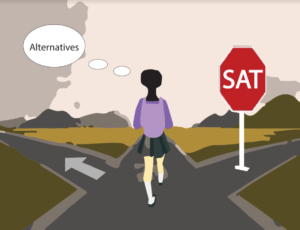 Some have decided to postpone their SATs, while others have gone out-of-state or taken the ACT

In November, junior Ethan Zuo sat in front of his computer, frantically searching for alternative SAT testing sites after his initial testing site in Palo Alto was canceled. After booking 20 tests at different times, he managed to secure a spot at Lynbrook High School, one of the two locations that were not canceled.

While Zuo was lucky enough to take the test, frequent cancellations during this school year, along with the school’s decision not to host the SAT in the spring, have forced some members of the Class of 2022 to seek alternative options.

“It is now a balancing act between location and availability,” junior Kavya Narayan said. “If you wanted a testing site within a 75-mile radius, you wouldn’t find an available time until six months out. If you expanded your radius to 200 miles, you might find an available spot that was too far out.”

Narayan’s original SAT registrations in August, October, December and March were all canceled, so she and two of her friends eventually decided to take the test out of state by renting an Airbnb and driving on a four-day trip up to Melford, Oregon.

“I managed to get a spot after registering just a day before the deadline, but I think going out of state is ridiculously extreme,” Narayan said. “We’re lucky that we have the means to do it, but I know it’s not only me who's doing it.”

Other students are also considering traveling to places like Reno, Arizona and Colorado, pushing the SAT off to a later date or simply switching to the ACT instead — which has more testing opportunities near Saratoga — following cancellations of the SAT. For 2021, the ACT held tests in February and has tests planned for April, June, July, September, October and December. Both the SAT and the ACT typically hold tests around seven times a year.

Such an alternative was fitting for junior Maanvi Chawla, who took the ACT on Oct. 24 at the Hyatt Regency near the San Francisco airport. Unlike the SAT, the ACT offered her a smooth registration in September for an October testing date.

Part of her decision to take the ACT was that, in comparison to the SAT reading sections, the ACT reading section felt more straightforward, despite the shortened time span per question. The ACT’s math and science sections also played to her advantage.

“When I was in sophomore year, I realized early on that I was scoring better on the ACTs,” Chawla said. “During the exam, I actually took it in a room with just me and the proctor because I have type 1 diabetes accommodations, and everything went well.”

However, according to junior Nandini Desai, the ACT may not be a practical replacement for the SAT; the ACT is not administered by CollegeBoard, so the test structure requires a different study strategy.

As such, some students are still traveling out of state to take the SAT, but guidance counselor Alinna Satake believes such measures are unnecessary during current COVID-19 circumstances. Although Satake acknowledges that the SAT is tied to certain financial aid and scholarship opportunities, she is not 100 percent certain on how the SAT will affect college admission outcomes with test-blind options.

“It makes me sad to hear that students and families have felt compelled to risk their health to try and take a test,” Satake said. “It's dereliction of duty on the colleges' part to not be entirely test blind because not every student has the opportunity or the means to travel for testing.”

On Feb. 9, various juniors and their parents attended the district board meeting to advocate for an SAT in March. Neighboring schools, including Lynbrook, Monte Vista and Cupertino, held the test.

According to principal Greg Louie, the district eventually decided against becoming a testing location due to a variety of reasons, including conflicts with the school’s reopening dates and the uncertainty of the county’s COVID-19 cases.

“Regarding hosting an SAT in the fall, it is a possibility but there is no guarantee yet because we don’t know what we’re going to be doing in the fall yet,” Louie said. “We will definitely consider and do what we can to support our students in the best possible way.”