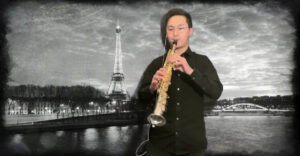 Junior Anthony Qin seeks a new way to entertain his Instagram followers with his saxophone performances by editing his videos using green screen effects during quarantine.

Standing before the city lights of Paris, junior Anthony Qin put on his iconic sunglasses and stood firmly while holding up his shining, gold saxophone. After a short pause, he began playing Edith Piaf’s “La Vie en Rose.” The city lights dissolved on the green screen background and formed into the Eiffel tower as Qin’s playing continued.

While in quarantine, Qin has found a new way to entertain people with his saxophone. His friends widely praised the videos Qin has posted on his saxophone Instagram account, @ant.saxy, after he took on a new editing style for his videos.

“Being bored during quarantine definitely plays into why I started editing these videos, but it’s more because I like playing music and making people happy,” Qin said. “People told me they like them, so I kept posting them. People always ask for more.”

Now, Qin updates his page every day with videos of him playing  different pieces, ranging from modern music like “Dolphin Shoals” from the Mario Kart 8 game series to classics such as Edith Piaf’s “La Vie en Rose.”

“Anthony's videos are based around many different popular songs that have propagated throughout our lives,” said junior Isaac Sun, who happens to also be Qin’s cousin. “Most of these songs are part of what we grew up listening to, and it's just been a fun way to reconnect with our childhood while also adding a bit of performance flair.”

Qin started playing the saxophone in sixth grade after quitting piano. He loved music but wanted to be part of the band. He started to treat saxophone more seriously when he entered high school and became a member of the Symphonic Wind Ensemble, the top band at SHS.

Qin’s dedication on saxophone is now a principal player, the first chair of his section. Aside from the school's band, he also played in the Santa Clara County Honor Band and the All State Wind Symphony, the top band in the state.

Qin uses only iMovie for editing and usually films most of the clips himself, but sometimes, with the help of Sun, he films a short skit.

Qin films by himself even when there are multiple players required for the music. He plays every section of the music and then duplicates himself in the video. Qin usually takes about one to two hours every day on filming and editing his videos.

“He is really passionate toward [these videos], and it makes me happy to see that there is something he truly looks forward to,” said Lingling Sun, Qin’s mother. “Junior year was supposed to be very busy, but right now he has time to make all these videos, which balances with his daily life pretty well.”