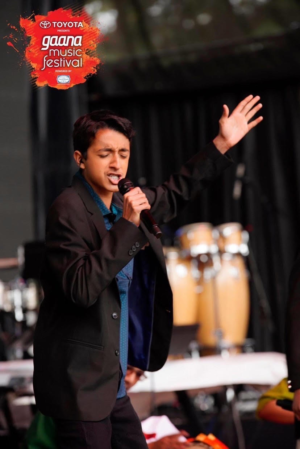 Chakraborty performs at the 2018 Gaana music festival in Shoreline, CA from May 19-20.

Junior Mithil Chakraborty was singing “Blue Suede Shoes” to his audience via Facebook Live on April 10 when it abruptly ended, leaving him in silence. As he rushed to change the karaoke playlist to another song and restart the live, doubt and hesitation clouded his head.

“Thoughts swirled in my mind: Were people criticizing his lack of professionalism? Did everyone leave, and would they not tune back in?” Chakraborty said. “Fortunately, as I restarted the live session, many people joined back, and I felt warm seeing all the supportive and positive comments.”

This event, broadcast on social media platform IndianRaga, a startup platform founded by students at MIT for artists to share their work, was a chance for Chakraborty to apply what he learned during his IndianRaga fellowship to a diverse audience. For 45 minutes, he sang R&B and Bollywood hit songs such as “Hollywood’s Bleeding” by Post Malone, “Ghungroo” by Arijit Singh, “Starboy” by The Weeknd and “Blue Suede Shoes” by Elvis Presley. As of June 1, the live show has 10,000 views.

Chakraborty began his musical journey when he was a toddler, and music and dance have since become an integral part of his identity. His early memories are filled with moments of imitating the Indian TV show “Namaste America” and classical Indian dance performances by his sister, which pushed him to pursue music and dance.

“My parents tell me that once I learned how to talk, I sang and danced immediately thereafter,” Chakraborty said. “They then put me in music and dance lessons, and one of my earliest performance memories is dancing in the Argonaut Elementary School variety show when I was in kindergarten.”

Chakraborty looks up to artists such as Bruno Mars and The Weeknd and Bollywood actors like Hrithik Roshan and Ranbir Kapoor. Their unique styles and combination of music and dance stand out to him, he said.

When Chakraborthy was 6, he began taking formal Western vocal lessons from music teacher Gayle Greenbrook. Chakraborty is also a 9-year member of the Mona Khan Company, where he takes hip-hop and Bollywood dance lessons; he has also used Skype to take Hindustani classical music lessons with teacher Kartik Raman.

Chakraborty’s first experience with IndianRaga occurred when he was 13. He and his mother were drawn to its mission of combining western and eastern music as well as its large following of over 370,000 subscribers on YouTube. These factors compelled him to apply for its fellowship, whose locations range from Virginia to San Diego. Chakraborty soon found that “that week during the summer of 2017 changed my life.”

“It was humbling and fulfilling to work with amazing musicians and genuine, down-to-earth people who were truly passionate about creating new content,” Chakraborty said. “I learned the process of professional audio recording, sound mixing and video editing. I returned to the fellowship in 2018 and made more innovative productions, including ‘Uptown Funk.’”

Chakraborty has been a part of over a dozen of IndianRaga’s  videos since, garnering him more than 500,000 views on Facebook and YouTube. The livestream on April 10 was his first online live concert; going in, he wasn’t sure what response he would receive.

“It was definitely nerve-wracking and stressful, but it felt fulfilling,” Chakraborty said. “Over 5,000 people tuned in from India, Europe, Australia and America. The comments saying how happy they were to have some entertainment during these bleak times made me feel proud.”

In addition to being an IndianRaga fellow, Chakraborty is a YouthFocus Hall of Fame Inductee and has performed at various events, including a Breast Cancer Awareness fundraiser, the Golden State Warriors halftime show at Oracle Arena, the reception for Indian Prime Minister Modi at SAP Center and the Gaana Music Festival at Shoreline Amphitheater. He also won Saratoga Idol his freshman year. Over the course of his musical journey, Chakraborty has sung and danced at several fundraisers for organizations like the American Association of Physicians of Indian Origin, Bay Area Lyme Foundation, Akshaya Patra Foundation, India Literacy Program and Retired Teachers Banquet.

While he has seen increasing success in his musical journey, the COVID-19 pandemic has affected his hopes for his Boy Scouts Eagle Service Project. He had originally planned to perform a musical piece for Alzheimer’s and dementia patients at the Hearts & Minds Center in San Jose this spring, but Chakraborty is instead working with the other performers on a video recording for the event.

Throughout the ups and downs of his career, Chakraborty has cultivated valuable friendships and a strong support system that he has come to appreciate. These individuals include his family — especially his mother, who he calls his “biggest supporter and inspiration” — friends and teachers like Greenbrook.

“Mithil understands the work it takes to become a good singer,” Greenbrook said. “His growth is due to his commitment to the craft and his diligence. He is an all-around performer, not just a singer.”

Through his 10-year musical journey, Chakraborty has formed lasting friendships and discovered a world where he can freely share his passion with those around him. Chakraborty said he treasures these experiences and hopes to spread the same love for music and dance to those interested.

“I know there is a lot of academic pressure and stress right now, and it can seem like valid career options are pretty limited,” Chakraborty said. “However, if music and dance are aspects of your life that keep you happy, you should continue to find ways to express yourself. There will always be something valuable in entertaining others and spreading cheer in people’s lives.”