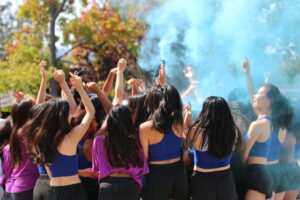 Powder guns blasted the afternoon sky with clouds of blue smoke. The unified, boisterous chanting of “Junior power!” dominated the quad at the end of lunch on Sept. 23 as a sea of blue-clad students jumped together in a crowd.

The last time the Class of 2023 enjoyed a mosh pit like this was two years ago on their freshman quad day. Though immediately pumped to outdo themselves as sophomores, they did not receive the opportunity to do so because of the pandemic, raising the stakes for their junior comeback.

This year, the junior class boasted plentiful decorations and a total of seven performances to accompany their “Scooby Doo”– themed skit. Junior class treasurer Allison Tan, who oversaw most aspects of the grade’s quad day, attributed the smooth sailing to increased participation; she said she was “super shocked” to see 15-20 students show up to weekly decoration meetings, compared to a  single two-person session in 2019. Similarly, the all-girls’ dance showcased a major increase in participation, accumulating 42 signups in comparison to little over 20 participants in freshman year.

Throughout the performance, the juniors executed diverse acts. During hip hop stunt performance, dancers ripped through a large banner labeled “JUNIORS RULE” as they bolted to the quad center to showcase a myriad of stunts. For the all-boys’ dance, 12 juniors clad in skirts and class tees flooded out onto the quad, in major contrast to the mere four brave performers in 2019. The dance elicited cheers from the audience with entertaining formations including a line where the boys hip-bopped in a domino effect, and even jumped around in a human train.

Right before the finale, juniors Avani Kongetira, Anastasia Ramirez and Ojas Somani performed their parody of “Good Little Girl” from “Adventure Time,” consisting of friendly roasts directed at seniors. All participants swayed and waved their arms on the quad steps in accompaniment.

Tan noted that the entire experience “was a lot less stress on class office this year,” thanks to contagious class spirit. In the end, the juniors finished second to the seniors in the overall competition.

“I felt that the junior class was united throughout the entire process of quad day and couldn’t have been happier with the results,” Tan said. “Everyone worked so hard!”