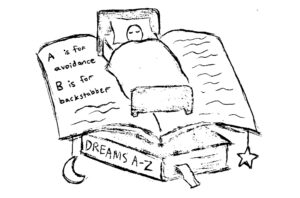 Photo by Victoria Hu
Even if my sleep isn’t so refreshing, I can always count on the dictionary to bring some positive energy into my day.

Permalink
Using the power of online dream dictionaries, I take action against the visions that rudely interrupt my slumber.

After reading this story’s headline, my classmates might think, “Wow, Victoria, you sleep? Who would’ve thought?”

Based on my perpetually tired-looking appearance, I’ve been told that I seem like a nocturnal bat who gets as much shut-eye as a junior with a caffeine addiction.

In reality, I’m proud to say I sleep at least an average of 6 hours nightly, a feat for almost any student here. I admit this is setting the bar lower than the kiddie-stepping-stool in my kitchen; but as they say, it’s important to appreciate all the little achievements in life.

However, sleep has recently become a problem for me — not because of how little of it I’m getting, but rather due to my  recurring nightmares. Usually, my peaceful power naps at 3 a.m. leave me feeling perfectly refreshed, but the occasional bone-chilling visions of being poisoned by the Costco samples lady or having baked potatoes for school lunch leave me sweating and shaking.

Instead of rambling on about this problem to my older sister, who sadly after hearing it for the 405th time has started to ignore my detailed and explicit nightmare explanations, I decided to embark on a personal mission to answer this necessary question: How can I sleep soundly at night (well, technically morning) knowing that I’ll encounter such horrors in my dreams?

Being the problem-solver that I am, I resolved to find a way to calm down my hyperactive imagination during my sleep.

A quick Google search told me that a few ways I can prevent nightmares are establishing a sleep routine, cutting back on alcohol and recording my dreams in a diary. The first two suggestions were a no-go — 1) no sophomore has the time to build healthy habits and those who do are lying, and 2) I don’t know why Quora assumes I have a drinking problem — so I figured the third option was worth a try.

Furthermore, I decided to go the extra mile by not just writing, but also interpreting my dreams. Any English teacher will tell you that analysis is important, and since I care about my sleep more than I care about “The Bean Trees,” it’s only logical to apply the same reasoning to my dream diaries.

I concluded that the perfect way to decipher the chaos in my subconscious was to consult a nice, reliable online dream dictionary for my diary entries. What could go wrong?

Nightmare: Being chased down by a psychopathic killer.

The dictionary says being chased means that I may be avoiding my issues, I am a close-minded person and I am running away from myself. (Wait, is this implying that I’m the psychopathic killer?)

Personally, I don’t want to believe in any of the dictionary’s three interpretations, because it’s blaming me for my nightmares, when I think school is clearly the one at fault.

I’d like to propose a different explanation: This dream is saying that schools need to tone it down with putting “The Most Dangerous Game” in the curriculum every year. If I’m starting to become one with Rainsford in my sleep, they’ve probably taught it one too many times.

Who said I’m avoiding my problems?

Nightmare: Crash landing into sub-Saharan Africa, befriending a giraffe after escaping the wreckage and then being forced to eat the giraffe for survival.

Analysis: It turns out that “to dream that a plane crashes suggests that you have set overly high and unrealistic goals for yourself” and that “to dream that you are riding a giraffe represents your desire to stand up amongst the crowd. You want attention, but aren’t getting it.”

Still, the dictionary must have some magical mind-reading powers, because how else would it know about today’s Socratic seminar? I kept trying to direct the conversation back to myself, but it turns out that was too “high and unrealistic” of a goal.

I just want some participation points, is that so much to ask for?

Ultimately, psychoanalyzing myself through nightmare interpretation has allowed me to realize some deeply profound truths:

Well, at least it was worth a try.