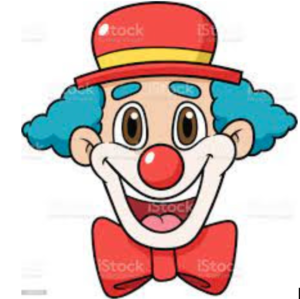 Common App Prompt #1: Some students have a background, identity, interest, or talent that is so meaningful they believe their application would be incomplete without it. If this sounds like you, then please share your story.

I’m a clown. Just not a very good one. Clowns are supposed to make people laugh, go around replacing frowns with smiles and be the life of the party. But every time I tell a joke, I see more confused faces than grins.

“Laugh by Laugh” is my motto. If I can get just one laugh, I can find enough fuel to tell my next joke. Sometimes I don’t get any laughs at all. As far as I can remember, I’ve been booed out of 16 stand up comedy clubs, and banned from five. But if I’ve learned anything from my many hours of watching anime, it’s that the protagonist is always beaten to a pulp before they get up and defeat the demon lord.

My comedy career started at age 5, and the first joke I ever told was to my dog. He let out a sort of coughing bark, which I took for a laugh. Over the next few days, I told him lots more jokes and he “laughed” even more. But in the end, the vet told us that Paulie had a condition that was making his throat dry, causing the cough-laugh. Even so, I could always tell my jokes to Paulie, even if she was just hacking back at me.

The other person who has supported my comedian dreams no matter what is my mom. Throughout middle school, she listened to the jokes I came up with. She’s the only one who always laughed at my jokes — much more than my dad ever has, anyway. Whenever I would tell jokes to my dad, he would sip his beer and ask why I didn’t just play baseball like he wanted.

Through my mom’s encouragement, I became determined to become  the next Kevin Hart. I actually got to meet him one time, when he came to a local TV channel and I was in the audience. He was even funnier in person, keeping everyone entertained as he told one joke after another. I even managed to get his autograph, and he told me to “keep your head up, buddy.”

No matter who tells me to quit telling jokes, I won’t stop. All of my idols started from the bottom at some point, and I’m sure one day I’ll climb out of this pit to stand at the top of the comedy world.

My journey to become a comedian has taught me many things, including persistence and perseverance. Every time I see someone in distress, I feel compelled to make them smile. It may seem impossible to become the world’s best stand-up comedian, but I don’t intend to stop climbing my way there, laugh by laugh.