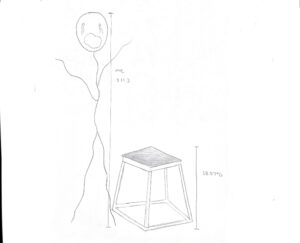 Photo by Victoria Hu
This thing has no right being as tall as an obnoxious toddler.

On my left shin, a mostly faded, purple-browning strip of skin still stretches all the way from my knee to my ankle. It’s theoretically a bruise, but it’s been there for four months, and I suffered a tremendous amount of exercise to get it — so I believe it deserves to be called a “battle scar.”

Unfortunately, I have no reasonably dignified story behind how I got my scar. While the gash on your grandpa’s knee from when he fought his neighbor’s dog 50 years ago has at least some glory, drama and action in the tale, there is only pain, embarrassment and plenty of P.E. teacher screeching in mine.

For the mildly sadistic people who are still reading, here’s what happened.

It was during the spring semester’s second-period P.E. finals, when dozens of sophomores and freshmen were squeezed into the weight room so that the students who were still stuck in P.E. could do their Final Gone Bad — a completely appropriate name — together in solidarity.

For those who aren’t familiar with it, the school has a CrossFit-based P.E. program instead of a sports-based one. The idea is to provide a foundation for a lifetime of fitness regardless of students’ athletic ability – though I’m not sure I’ll be doing any box jumps in the near future.

We were split into five different stations (box jumps, rowing, etc.) and were continuously rotating between them. We paired up to take turns counting each other’s repetitions.

For the first few rounds, I was hopping up and down on my 18-inch box, attempting to maximize my rep number, as the teachers screamed out motivation — life was as good as it gets in P.E.

Normally, you wouldn’t put too much thought into the aerodynamics of jumping onto a box — you just jump and let physics do the rest.

But on one of my jumps, I somehow overshot.

I landed on the far end of the box, tipped it over with my weight and landed in an undignified heap. Upon impact, my shin stung almost as much as humiliation did. At least my left leg took one for the team, so my right shin somehow came out unscathed.

I got up and pretended I couldn’t hear my evaluator’s snickers behind me or feel the stares of the tiny freshmen who now were most definitely scared for their lives at this station, and faced the box again.

This time, as it loomed before me, it somehow appeared to be much taller. I’ve run the numbers and calculated that an 18-inch box is in fact 28.57% of my height, almost one third! (I’m not that short, those things are just gargantuan.)

I mustered enough courage to take another leap of faith — and even lasted a solid 10 reps — before tipping over the box and falling on my face for a second time.

My friend came over from the rowing station and asked me if I was OK. She pretended to be worried for around five seconds — before spending the rest of the period getting a Ms. Aoki-5-star-quality ab workout from laughing hysterically at me.

At the very least, I can find consolation in the fact that I’m a natural comedian, whether I want to be one or not.

The moral of the story? Trying too hard in P.E. can lead to dire consequences.

Maybe I shouldn’t have jumped so fast. I realize in hindsight that I pushed myself too hard: I’m not usually one to show off by bench pressing an extra five pounds, so why did I put so much effort into my box jumps?

Instead of blaming my severe lack of spatial awareness or my painfully uncoordinated legs (they’re trying their best, OK?), I would like to complain about the boxes themselves and the system that forces us to jump on them.

Please, P.E. teachers. You really can’t be smiling and pointing at this mountain of flimsy plastic, pretending like everything will always work out perfectly. A box that is 28.57% of my height is a safety hazard for clumsy people like me.

Now that it’s been four months since this whole fiasco and I’ve fulfilled my two years of required P.E. credits, I feel relieved that I will never need to face a box jump ever again.

They say time heals all wounds: I no longer flinch when I see unusually large stepping stools or problems asking me to find the volume of a box, so maybe my ego is on the road to recovery. But for now, the bruise on my shin will remain a constant reminder to stay far away from the dangers of intensive exercise.