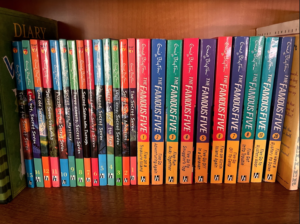 After my elementary school-aged mind had exhausted the “Harry Potter,” “The Maze Runner” and “The Hunger Games” series, my mom decided to take matters into her own hands and introduce me to what she called “the real literature” of her childhood.

This meant British books written in the 1930s and 1940s, like “The Famous Five” and “The Secret Seven,” both written by Enid Blyton, and “Nancy Drew,” written by many authors under the singular name of Carolyn Keene. All of these were children’s adventure novels whose inclusion of detectives added to their allure, which I rediscovered in quarantine.

When I first sat down to read these books, I didn’t know what to think. These books were set in the real world, not a dystopian fantasy land, and I missed that aspect. I missed being transported to another universe because until then, I thought that’s what books were supposed to do — take you out of the real world.

But as I kept reading, I was surprised by the hidden layers that could be uncovered in the real world. I started looking for distinct objects, like pretty pins or obscure charms, in my daily life, telling myself they potentially were the key to solving a great mystery.

Both “The Famous Five” and “The Secret Seven'' series have similar plotlines, though the characters themselves are completely unrelated.

“The Secret Seven” stories take place during the school time, as the characters try to solve mysteries during day school. Their Secret Seven Society includes the leader, Peter; his sister Janet; Jack, Peter’s best friend and fellow schoolmates Pam, Barbara, Colin and George. The society is very organized, and all the children are clever, always looking for clues around their school.

“The Famous Five” stories take place during the children’s school holidays, after they have returned home from their respective boarding schools. The Five comprises of siblings Julian, Dick and Anne, their cousin Georgina, who prefers to be called George, and Timmy, George’s faithful dog. Julian is the oldest and most mature, while Dick is mischievous yet dependable. Being the youngest of the group, Anne is the most frightened, but Georgina’s feistiness balances her out.

My personal favorite is “Five Go to Smuggler’s Top,” where the children are forced to stay with an estranged uncle after a tree falls on their house, but the relative is kidnapped. The house they stay at has secret underground passageways and hidden tunnels, where they find clues as to where he could be, and I always imagined myself navigating the maze of tunnels by myself.

The “Nancy Drew” series follows young female detective Nancy Drew as she encounters puzzles and mysteries in her daily life. Many times she is accompanied by her family members or best friends Ned, Bess and George. The mysteries are a lot more bizarre than any Blyton series, with hieroglyphs, ghosts, seances, amulets, notes with clues and more.

In “The Mystery at Lilac Inn,” one of my favorites in the series, Nancy is at a friend’s wedding where she has to deal with an impersonator, a bomb going off in her cabin and ongoing robberies. I remember being on the edge of my seat all the time, something my mom and I both loved about the series.

Like the “Scooby Doo Mystery Inc.” episodes, all the series use the same characters in every novel but a different mystery in each one.

Out of the three series, my favorite by far was “Nancy Drew.” It meant a lot to me to have an intelligent, resourceful and independent female main character, and I wanted to analyze the world just like her. I loved the clues they laid out throughout the novel, and every chapter seemed significant to the plot.

Although I did enjoy “The Secret Seven,” I appreciated “The Famous Five” more. The five detectives in the series were much more developed and had more progression in the novels.

With seven leading characters all guiding the plot, “The Secret Seven” was a confusing read, and after I had already gotten into “The Famous Five,” it was hard to become invested in the new characters.

The best part about all of these books is that, like “Harry Potter” or other classics, they can still be enjoyed at any age. It didn’t matter if I was reading them 70 years after they were first written because they focused more on human nature rather than the culture of the time period.

So if you’re hoping to gain a new perspective of the world without the facade of magic and dystopia, I say give these books a try; after all, the world is full of mystery.