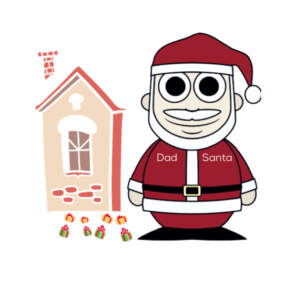 I became Santa Claus at age 7: That was the first time Santa didn’t listen to my wishes.

I wished for a beyblade, a spinning toy, but I ended up opening the gift box to find that I got a “Toy Story” figurine: Mr. Potato Head.

Disappointed, I came up with the hypothesis that most of us come to at some point or another: Santa had to be one of my parents. Judging from Santa's physical appearance — a heavy-set man with a red robe and a full white beard — I thought he must be my dad.

I had to prove my theory, so I planned Mission Unreal Santa with my twin brother. I secretly took a small cologne bottle from my dad’s drawer and sprayed a bit on my dad's jacket, setting up my experiment.

When Christmas finally came around again, I hid behind the Christmas tree and waited quietly for Santa to show up with gifts. At midnight, Santa walked in with a gift box.  I noticed the appearance of Santa was different from what I read in the books. As he got closer, I picked up a whiff of perfume.

By then, I was fairly certain that my hypothesis was correct, so I did the logical thing: I tackled Santa. All of the sudden, things started to make sense. Santa held me up the same way my dad always did, and even his body shape matched with the somewhat muscular and overweight shape of my dad’s body. And when I finally saw his face, it was, of course, my dad’s face with a white beard plastered on.

Although my 7-year-old self felt pretty smart about exposing my dad’s alter-ego, I also felt sad since I had been wanting to be friends with Santa for a while just to realize he was a myth. I must say ignorance is bliss, especially when it comes to Santa. But hey, at least I got to catch my dad covered in cologne.