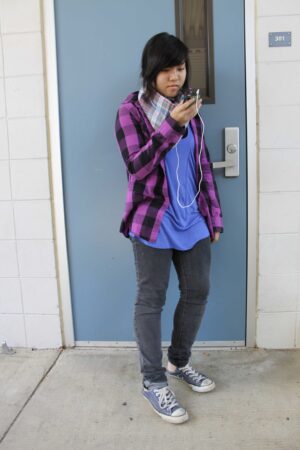 Jackie Gu poses as a 'Hipster'

Are you sick of your hopelessly mundane lifestyle? Will you go insane if you hear another song on the radio by a whiny country girl with lyrics seemingly written by a prepubescent teenybopper trying her hand at bad love poetry? Follow the advice of this article, and soon you will be free of your life dictated by mainstream constrictions! With their lives steeped in bohemian culture, iPods stored full of obscure indie bands and hole-ridden clothing from the ’60s, hipsters pride themselves on their estrangement from mainstream media. Care to join in on the mainstream-bashing fun? Hipsterdom awaits you!

First, check your closet. Do you own clothing from Forever 21, Pac Sun, American Eagle or any other store that can be found in a mall? Do you wear Converse, Vans or Uggs? If you answered “yes” to any of these, burn all the aforementioned items. Revel in their ashes. If there are any pictures of you wearing any of these, staunchly deny all evidence. In the era of Photoshop, who puts any weight in photographic evidence anyway?

Regarding fashion, go all out. Shop in run-down thrift shops that look like they’ve been around since World War I. Raid your grandmother’s closet. Wear unnecessary glasses. Find ironic shirts. Grow a mustache. Grow a beard. The only rules of hipster clothing are 1) anything a prep wouldn’t touch with a 20-foot-stick is approved, and 2) if you’re a guy, stock up on multi-colored jeans tighter than your girlfriend’s.

You cannot listen to Rihanna, Miley Cyrus, Eminem, Taylor Swift, Katy Perry or anything else on Top 40 charts. In fact, you can pretend you haven’t even heard of most of the popular artists at any given time. “Justin Bieber?” you might say innocuously. “Who’s that?” Just make sure that you delete the songs or artists you’re feigning ignorance of from your iPod. If you pretend not to know Bieber and are later caught singing along to “Baby,” your image is in serious jeopardy.

It is rumored that a hipster’s IQ is directly proportional to the obscurity of the bands he or she listens to. When invited to discuss music taste, scoff and inform the inquirer that your music taste is too esoteric for them. Start listing every obscure indie artist you’ve ever heard of, and throw in a few made-up names as well to secure your hipster credibility. There’s a simple formula for making up indie band names on the spot: The + Adjective + Plural Noun. Examples: The Aquamarine Hippos, The Lead Crayons, The Neon Tokens. No one will be able to tell you’re making them up.

Class spirit is overrated to every true hipster. Don’t participate in Homecoming, rallies or student council; not because you are shy or afraid of being the center of attention, but because you don’t want to damage your painstakingly-constructed reputation. After all, you didn’t become known as the mysterious loner who sits in the corner and listens to bands no one has ever heard of (and never will, because they don’t actually exist) for nothing.

So, there you go. Follow these guidelines and you’re sure to reach the height of hipsterdom in no time. But be warned: as Time magazine said on hipsters in a July 2009 issue, “Everything about them is exactingly constructed to give off the vibe that they just don’t care.” Because they have so carefully constructing that aura, their actions are in fact guided by the mainstream in their efforts to avoid it.