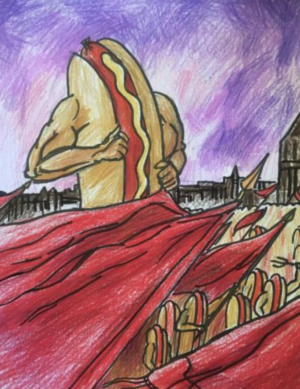 There are only a few questions that have remained unanswered over the course of human history. Reconciling Einstein’s theory of general relativity with quantum mechanics, understanding the human consciousness and finding out exactly how life began on Earth have all stumped generations of the world’s brightest minds.

However, all of these trivial contemplations pale in comparison to the most paramount controversy since the dawn of the 19th century: Is a hot dog a sandwich?

There’s never been a question more crucial to the advancement of society. Against all odds, I have pored through countless research papers, ancient tomes and even the Holy Bible to present to you, the reader, the final word on this subject.

We will establish the hot dog as a cooked sausage placed between halves of a partially sliced bun, sometimes topped with condiments like relish, onions and chili, or drizzled sauces like ketchup and mustard. They are sold at baseball games, barbecues and at stands on city sidewalks. They are just about the most New York thing in existence. It’s hard to find anyone who doesn’t conform to this consensus.

Let us then examine the dictionary definition of “sandwich.” According to Oxford Languages, a sandwich is “an item of food consisting of two pieces of bread with meat, cheese or other filling between them, eaten as a light meal.”

We must next consider the function of a sandwich. In 1762, even before America declared independence, people were coming up with ways to be lazy. One of these people was John Montagu, the 4th Earl of Sandwich. He was the British first lord of the Admiralty during the American Revolution, so he was obviously incompetent. He would often take bribes and distribute political jobs, garnering much criticism.

According to legend, Montagu was an avid gambler — and allegedly didn’t want to leave the gambling table to take his meals. One day, he requested his cooks to serve him roast beef between two slices of bread so he could eat with one hand, and so the sandwich was born.

The invention of sliced bread in 1928 skyrocketed the unorthodox “sandwich” from obscurity into fame. It offered a convenient alternative to pies, biscuits, gruel or the tears of orphans. Thousands of factory workers took this meal to work as the world rapidly industrialized.

People around the world added their own regional flair to the sandwich, and so the panini, bagel sandwich, submarine sandwich and many others were born.

The hot dog fulfills the original purpose of a sandwich:  a convenient food item that is neatly packaged and can be eaten with one hand. A hot dog is also a light meal, eaten as a snack during sports games but not close to filling enough to be a satisfactory dinner. Additionally, hot dogs align with the central concept behind a sandwich: a sliced loaf of gluten encasing an interior filling.

Skeptics will make banal arguments about the hot dog’s shape or composition. But bun shape is not an issue: Yes, submarine sandwiches are elongated and partially sliced, with the two half-buns hinging at the junction, and so are Subway sandwiches and Philly Cheesesteaks. Hot dogs are also very similar to burgers, which are also considered sandwiches, in that they have a sole portion of processed meat between two buns.

Through these findings, we can conclude that hot dogs, purely through analysis of their chemical makeup and dimensions, are, scientifically speaking, sandwiches.

In conclusion, I have used facts and logic to obliterate the weak propaganda of anti-hot dog bigots. Science, common sense, and basic human decency all support my argument. 2021 is a time of tolerance and acceptance. Hot dog discrimination is vile and base, the antithesis of what we as a community should stand for. I urge all like-minded hot dog comrades to take a stand for what is right. Never again will hot dogs be trampled under the cruel foot of sandwich elitists. VIVA LA SANDWICH.