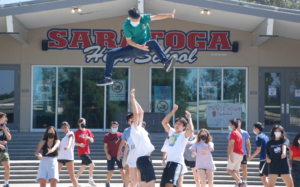 Photo by Selina Chen
Derek Hsu was thrown into the air by his fellow dance members during senior stunt dance practice.

As senior Kaylie Wong stood under the awning in front of the cafeteria waiting to start the Senior All Girls’ Dance practice recently, she worried that after a year and a half of completely virtual events, people wouldn’t show up. However, her worries began to ease as she saw over 50 girls stream in, armed with water bottles and eager to learn the dance in time for senior quad day on Sept. 24.

For the first time since the 2019-2020 school year, the school will host quad day during the week of Sept. 20-24. Each day will feature a different grade during lunch in the quad, during which they will perform a skit, hold various dances from K-Pop to stunt and host performances by the Color Guard and Drumline.

While many students feared that Homecoming participation would drop due to the pandemic, Wong said there has been a surprising increase in participation among seniors in school-sponsored activities, especially quad day.

“It’s almost the exact opposite for us,” Wong said. “We have over 50 sign ups for all girls dance and over 20 for all boys dance, which surpassed all of our expectations.”

Similarly, the juniors have had significantly higher skit participation. Their freshman-year performance only had only one skit writer, compared to the 15 skit writers this year. Junior class treasurer Allison Tan credits this to not only a higher interest in joining school events post-pandemic, but also increased school spirit after becoming upperclassmen.

On the other hand, the sophomore and freshman classes reported having low turnout, due to COVID-19 concerns and a lack of class spirit. Freshman class officer Saejel Thomas found that many freshmen chose not to participate due to fears of COVID-19 transmission.

“Some kids were uncomfortable being in those big groups,” Thomas said. “If COVID-19 wasn’t there, it would have also been a lot easier to have more people and make it more interactive.”

While the sophomore class did not find COVID-19 concerns to be a major factor in low participation, many sophomores were reluctant to join because they were unfamiliar with the concept of Homecoming week, as they had never participated in an in-person Homecoming.

“After more people started hearing about it, it became a lot easier,” sophomore class president Taylor Chu said. “But in the beginning, it was hard spreading the news about it since no one had even heard of quad day before.”

Wong said the return to in-person school motivated many students hone in on their school spirit through participating in any way they could. Wong expressed her gratitude and eagerness to start transitioning back into homecoming week.

“I think that it’s definitely my favorite week. So I’m super excited for it,” Wong said. “I’m super proud of our class for coming together.”