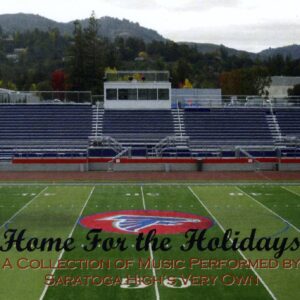 “It was really cool because we got to go to a professional recording studio,” said sophomore Arianna Paranzino. “It is so fun to be with the other girls on the [cheer] team singing.”

The Sprit Squad sang “Santa Claus is Coming to Town,” and the varsity football team joined them on the CD, lending their voices for “Jingle Bells” and “Twelve Days of Christmas.” The students recorded the songs in the Sound Management Inc. recording studios on Nov. 17.

“I think the varsity players sing really well,” said senior quarterback Michael Guercio. “We can get the right pitch at the right time, and I think our robust manliness covers up any minor flaws.”

Senior Aaron Garg recorded the song “Delivering Presents” live from the McAfee Center playing his dizi, a Chinese flute. Garg agreed to record on the CD after Sports Boosters requested him to perform following a recent recital. He provided the background music for a few other tracks.

Other talented singers included on the track are juniors Samantha Pack, Maddy and Chris Renalds and senior Juliana Lustenader as well as the Saratoga choir, the Saratoga Singers.

The CD can be purchased at the office for $15. All proceeds benefit the school’s athletic programs.