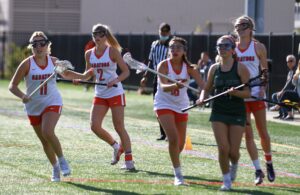 Mary Campbell, Caroline Keogh, Leena El Ashmawi, Casey Gilligan run together against their home game against Palo Alto on March 30, which they won 9-7

Permalink
Despite working with a condensed roster, the athletes are improving every game and growing closer as a team

Senior girls’ lacrosse midfielder Caroline Keogh feels lucky to be on the field this year with her varsity teammates— and it’s not just because the team is back from the pandemic season of 2021. Initially, there were doubts about whether there would be a girls’ lacrosse team at all with five of the 16 athletes being freshmen.

“We have girls who have never played before who are starting on varsity,” Keogh said. “It can be tough playing against  teams like Los Gatos who have players that have been playing for years.”

With many of the athletes having little to no lacrosse experience and dealing with two key injuries from senior Lauren Vandevort and sophomore Morgan Faye, the team is training hard to compete against better teams composed of mostly juniors and seniors.

The addition of coach Alyssa Dunlap has helped the team grow stronger, according to Keogh.

“She’s definitely a lot tougher than our coaches last year, but I think that’s the reason we’ve made these improvements,” Keogh said. “She notices the little things that other coaches hadn’t before.”

Despite the smaller and younger roster making the team seem less competitive on paper, the smaller team size has allowed each player to form more cohesive relationships with each other. From hosting fundraisers at MOD Pizza and Chipotle to organizing team events outside of practice, the players are learning to work with each other to “strengthen their bond,” Keogh said.

Junior midfielder Kayla Steele said the main goal of the team currently is to “play with intention” and give full effort in every game they compete in.

“For the rest of the season we’ll just cherish our time together and really work together as a team to grow and understand how to work well with each other,” Steele said. “Everyone on the team counts.”