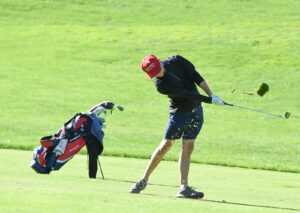 Sophomore Michael Burry gets full entension on a shot.

Sophomore Michael Burry rolled the ball with his putter on the closing hole. The ball hung on the edge before tipping into the hole, leading to an emphatic fist pump. The putt proved to be crucial. The Falcons beat Cupertino away in a narrow 185-186 victory, putting Saratoga in an ideal situation to win the league with a perfect 5-0 record.

“We felt really confident,” sophomore Albert Jing said. “We all felt like we were playing at a high level and ready to take the league.”

Even so, the boys’ undefeated bid came to end a little less than a week later at home on March 25 against Cupertino High School.

The rainy and wet conditions proved too much for the team, leading to a crushing 189-187 loss to Cupertino High School on March 25. The Falcons were led by junior Kevin Sze’s even par 34 and Burry’s two over par 36.

“That loss hurt,” Burry said. “We felt that we had worked really hard coming into the match. We were aware of Cupertino’s talent and put in a lot of time on the course. It sucks that it didn’t pay off.”

The Falcons had no time to pout the loss, as they faced rivals Los Gatos High School a day later, making quick work of the Wildcats and winning with a score of 189-200.

Although the team struggled on the aerated greens of La Rinconada Country Club, Burry led the team and medaled in the match shooting a 35 1-over par. The round included an impressive four birdies.

Other players found putting on the inconsistent aerated greens difficult due to the unpredictable bumps and bounces. Golf courses aerate greens to help grass grow better in the future.

“Putting on aerated greens is like the golf version of taking a math test without a calculator,” Liu said. “Possible, but miserable.”

The team concluded the week with a match against Monta Vista High School on March 27.

Monta Vista’s talent and depth put the Falcons in an 11-shot deficit after Saratoga’s first four players finished their match.

“Their team’s always been pretty solid,” said Liu. “All six of their players can shoot under par which is pretty rare to see, but we feel like we can match that.”

Senior Daniel Kraft and Sze pulled through in the last group, shooting a 3 under 34 and 4 under 33 respectively.

The combined score of 7 under is the lowest of any previous twosome in Saratoga High history.

“I’m pretty surprised we broke the record,” Kraft said. “We both played pretty solid, but to be honest we probably could’ve gone even lower. This is just validation that this team is special.”

Ultimately the Falcons pulled through with a 185-191 victory.

The Falcons looked to continue their hot streak against Los Gatos on April 1. The team got off to a quick start with Burry’s even par 34, and Sze tied Burry for medalist honors.

The Falcons made easy work of Los Gatos, winning the match 179-204.

The Falcons played Milpitas on April 3, but The Falcon could not cover it in the print issue because of printing deadlines.