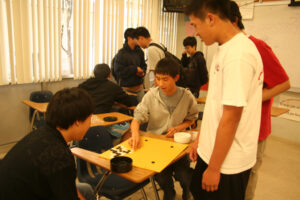 SHS’s Go Club was ranked in the highest bracket in the junior and senior division and finished with three wins and one loss, just under Mission San Jose High and the Orange County Go Club.

The tournament officially began early March and lasted until late April. Matches were decided based on the team’s skill level and participants were randomly paired to play each other.

Co-president of the Go Club senior Michael Su said there were really big gaps in the strengths of each team in terms of deciding who each team
played.

“There wasn’t really anyone that was exactly at our level,” said Su. “Most of the schools were either really strong or really weak.”

Go, a strategy board game originating from China also popular in Japan and Korea, is traditionally played by two people on a wooden board and involves the placing of black and white stone pieces. For this tournament, however, participants competed through the Internet on the KGS Go Server, a server that hosts on-line games, allowing players to compete with members of other teams without having to meet face-to-face.

Different time zones caused problems for opponents in terms of the pre-set time for each match, which began in the afternoon or the evening. This caused some players to miss their games, but the Go Club was lucky to have a substitute player as a backup.

The Go Club, which consists of 12 members, meets weekly in Room 409 during Wednesday tutorials to practice the game.