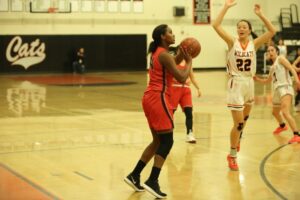 Senior Bereket Bailey shoots a three-pointer in a game against Los Gatos in the 2019-2020 season.

2019-2020 season recap: Battling significant injuries, the team tied for fourth place in the league and advanced to the CCS quarterfinals.

After former varsity girls basketball coach Danny Wallace stepped down to spend more time with his family, the school sought out a replacement; they hired coach Jaclyn Brode, who brought along her staff of varsity assistant coaches Danny Ackman, Kristin Garcia and Victor Matinez, and JV coach Chaz Pillatsch.

Brode has 19 years of coaching experience, eight of which were at the high school varsity level. Formerly the Los Altos High School coach, Brode saw an increase in participation during her time as a coach, and she finished her tenure there with an 87-86 record in seven seasons. Her team qualified for CCS in five of the seven seasons, bringing the team into the upper league. She also coaches AAU for West Valley Basketball Club.

She chose to coach at Saratoga because she felt it would be a great fit for her staff, and is excited to implement her program to contend for more CCS titles.

“I have always respected the success Saratoga has had in girls basketball; they were always a tough team to compete against,” Brode said. “I knew the school respected their sports programs and valued the importance of athletics in a student’s school experience. I saw Saratoga as a place we could put roots down and coach for many years to come.”

The team has also faced many obstacles during the pandemic. As Brode is new to the school, it was difficult for her to meet potential players and advertise her team, which only has 11 players and no JV team this year. Because of COVID-19 regulations, the team was also unable to spend time in the weight room and gym, missing out on technical and physical training that they would normally do in preparation for the season.

“COVID has been an absolute monster to overcome,” Brode said. “That’s tough to swallow when taking over a new team, but this year it’s just the way the cards were dealt and we’re focused on laying the foundation for our program for the years to come. I’m confident we will continue to build and grow the program as we transition out of COVID life.”

After months of holding all practices via Zoom or on the track and outdoor courts due to safety protocols, the team received clearance to play in the gym on April 5. Players are being tested for COVID-19 twice a week, and may only play games if they receive a negative result.

They are scheduled to play 13 games throughout the season. The team currently has a record of 2-0 after winning their first two games against Wilcox on April 20 and April 23, with scores of 47-30 and 45-33 respectively.

In terms of spectators in games, each player received a family pass that admits up to two members of the athlete’s immediate family, an email sent out by principal Greg Louie said. While players on the court are not mandated to wear masks during games, players and coaches on the sidelines are required to wear face coverings at all times.

Brode said that another challenge for the team is the truncated season, a reality that makes it hard to teach the principles of basketball and build intuition well. Rather than simply memorizing specific plays, the team aims to be able to use their skills and acumen to read the defense and react accordingly. Brode wants players to have a well-rounded skill set and understanding of the game, despite the compromised season.

“The girls are trying to learn about me as a coach and what I want and expect just as I’m trying to learn about them as people as well as their strengths on the court,” Brode said. “We will grow together and get better each day we’re in the gym, but no doubt this season will be a challenge just because of the time crunch we’re in.”

Brode thinks the team has the potential to make significant strides this spring. Although she is not making any predictions for where they will finish in the league, she hopes the girls will play hard each game.

“These girls deserve a lot of credit for what they’ve already accomplished in sticking with each other in a year of such uncertainty, and I hope they enjoy this season as much as we’ve already enjoyed getting to know them and work with them,” Brode said. “These young ladies are a tough bunch and I am proud to be their coach.”