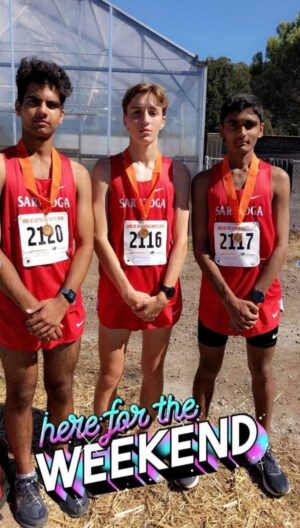 Senior Niyanth Rao joined track and field on a whim during his freshman year. He had experience running from playing soccer in middle school. By the end of his first track season, he had accomplished his goals of breaking 5 minutes in the 1,600 meter race and 11 minutes in the 3,200 meter.

The key behind his improvement? His teammates.

“My initial experience in track was amazing because everybody was very supportive,” Rao said. “Practices, though hard, were very rewarding.”

Rao’s notable improvement inspired him to join cross country in the fall of his sophomore year, as many of his track teammates played both sports.

Rao built strong relationships with 2020 alumnus Shivam Verma and junior Harry Dance, both of whom were extremely dedicated varsity athletes. The physical prowess and dedication of his teammates were constant reminders to push himself.

“Having Shivam and Harry as teammates was very inspirational due to their high skill levels, and the work ethic and passion they both had definitely rubbed off on me as well,” Rao said. “That inspired me to push myself to try to come as close to them as I could.”

The three bonded through the grueling toil of daily practices and soon began meeting consistently outside of school and practice, both for further training and just hanging out. Jamba Juice became an after-practice tradition, and in the summer of 2020, they biked together from Saratoga to San Francisco, crossing the Golden Gate Bridge and stopping by several other landmarks.

This year, the pandemic has made it difficult for athletes to have similar sports experiences. Many traditional team bonding events, like dinners and team nights, have been canceled or scaled down significantly.

Rao, who has been a varsity runner on cross country since his sophomore year, regrets that the freshmen on the team were not able to have a “proper cross country experience” due to the cancellation of all the school’s typical meets in favor of smaller-scale dual meets against only one school at a time. For instance, the team was unable to run courses like Baylands and the infamously hilly Crystal Springs, which Rao considers essential experiences for cross country runners, both in terms of scenery and competitive spirit.

“Our meets typically involve many schools and runners, which makes them a lot more competitive and hectic,” Rao said. “It’s an important and invigorating experience and I’m sad that the freshmen didn’t get the chance to experience it this year.”

Thankfully, Rao feels his relationships with teammates have remained strong under lockdown — even with the cancellation of many sports, he was still able to meet and train with his teammates while socially distanced.

Freshman Yul Hong, a center forward on the boys’ varsity soccer team, said that the bonding that comes from playing and growing with teammates in any team sport was “still able to work its magic.” Hong, who was acquainted with several of his teammates before the season started through club soccer, felt that even without specific events to bolster team spirit, he felt much closer with his teammates by the time the season ended.

Hong accredits the closeness of the team to frequent practices that built camaraderie among the players.

“You could see that as we got closer, we started playing much better,” Hong said. “Even with a shorter season than usual, I think we just bonded as we played together and started to know each other more.”