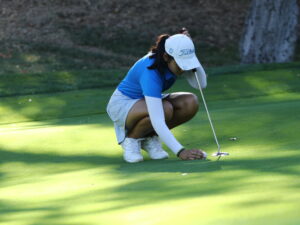 Photo by Now and Forever Studios
No. 1 player sophomore Sarah Lim sets her ball down on the green for her next putt.

Despite a bumpy start to their season, the girls’ golf team, led by head coach Dave Gragnola, found surprising success late in its season, qualifying to league finals with a record of 3-7.

The team’s top two players did well in post-season play.Sophomore Sarah Lim finished seventh in league, and freshman Millie Wang finished fifth. Both advanced into CCS, where Wang qualified to the Northern California Golf Championship (NorCal) and then the State Championship, which took place in San Gabriel Country Club on Nov. 16.

At CCS, which was at Laguna Seca Golf Ranch on Nov. 1, Lim had to withdraw from the competition due to a delay from heavy rain and wind and she had to catch a flight to a Louisiana golf tournament she had already committed to attend. But Wang played on and managed to shoot 3-under-par during the first nine holes and 3-over-par in the last nine.

She tied for first with four other players and advanced to the Northern California Golf Championship at Berkeley Country Club on Nov. 8. In the playoff for first place, she bogeyed the first hole along with another first place player, ending CCS in fourth place after losing a scorecard playoff with her 3-over-par back nine.

Later at NorCal, Wang shot a 3-over-par 75, placing fourth and dodging a five-person playoff by just one stroke. Her high placement not only qualified her for the State Championship, which she said she looked forward to, but also got her nominated in Mercury News Athlete of the Week voting. During the State Championship, she shot 11-over-par 83, placing her in 40th place out of 54 individual players.

“I’m nervous, but I think it’ll be a really good experience since I’ve never gone to this sort of event before,” Wang said. “It’s going to be really fun.”

As for the team, the Falcons placed fifth at league finals with Lim shooting a 3-under-par 68, coming in first place, and Wang, who shot a 75, coming in sixth. They were unable to advance to CCS as a team, however. Other members of the team that competed were sophomores Melanie Lee, Lydia Li and Eunice Ching, freshman Stella Cho, juniors Tara Natarajan and Carine Chen and senior Ananya Seth.

Their regular season contained many fluctuations in performance. In their first three matches, the Falcons beat Monta Vista twice and Gunn once.

Their season took a downward turn when they faced both Lynbrook and Palo Alto in the same match. Because they played against two different teams, which meant that they were separated into more groups, they ended up all being paired up separately and cycled through holes with no access to support from each other. In the following weeks, they continued to lose matches against Los Altos, Gunn, Monta Vista and Lynnbrook. Nevertheless, the team saw more success than the previous year, when they had a record of 2-7.

“It’s really important to stay positive while you play, so when I notice my teammates being negative, I try to tell them something funny,” Lim said. “It’s important that we have fun and really enjoy why we’re out [on the golf course] in the first place.”

Lim said she believes playing well and being a supportive teammate are equally important, and as such, she continues to focus on improving her play and bonding with her teammates. Regardless of whether she loses or wins, Lim said she improves by watching players from different schools.

With the season at its end, Lim holds high hopes for next year’s season.

“I’m sure that even after this golf season has ended, my teammates and I will continue to improve,” she said.