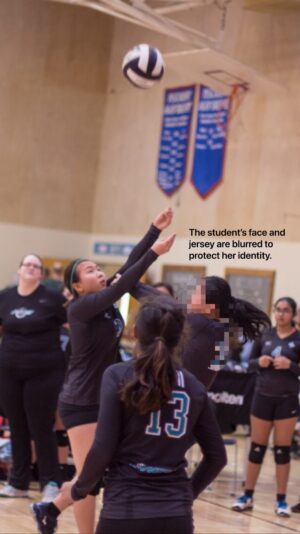 Anna is a pseudonym to protect the student’s identity.

I met Anna in HC Synergy club volleyball after I was chosen as setter and she was chosen as middle blocker for the 14’s team. The first time I bumped into her on the court, my coach sagely told us that setters and middle blockers always “hate” each other. Logistically, it was because the rotations — the different paths players take to get from the starting position to their playing position — always placed us in each other's way. But how bad could it be?

Turns out, “bad” ended up being a couple bloody feuds between my face and Anna’s fist — and I don’t mean “bloody” in the British way.

The tournament was at Pescadero High School, a.k.a., the middle of nowhere. It was the “wake up at 4 a.m. and drive forever” type of day, so it wasn’t my fault for being a bit dazed on the court.

However, I couldn’t afford to be off my game because a setter, according to every Chinese dad who is an avid fan of the Chinese women’s national volleyball team (you’d be surprised how common they are), is the “soul of the team.” I always cringed a bit at the title, but it’s true; the setter makes the important calls on where the second pass goes.

During games, if the setter wasn’t able to get to the second pass, we were supposed to scream “HELP!!!!” as if our lives depended on it so that a teammate would know to take it in our place.

It was two sets into the first game of the day. My coach decided that my lacking performance was due to my newly cut hair getting in my face, so she procured a random piece of cloth and forced it on me as a headband, though its scratchiness only served as distraction.

On that particular point, the first pass went slightly off from the center of the court — not perfect but totally salvageable. I cannot remember whether I called help or not, but Anna and I rushed toward the ball from opposite ends of the court, arms outstretched in front of us as we both tried to pass it. Next thing I knew, Anna’s fist collided with my mouth, which was quickly filled by a metallic taste.

Anna apologized and I waved her off — after all, all is fair in volleyball and war — so I was back on the court within a minute because there was a game to win (or lose, oops), but the more mortifying fact was that the moment was perfectly caught on camera by a parent.

In the photo, I was staring up intently at the ball with my mouth open like a goldfish, while Anna was scrunching up her face in anticipation of the imminent crash, her fist a mere inch from my lips. In the background, a teammate gaped at the scene and my coach watched with a pained expression.

I could only count myself lucky that the second time Anna’s fist sought out my face wasn’t photographed. I wasn’t so lucky, however, when it came to avoiding a concussion.

It was the Far Westerns tournament in Reno, and the absence of a teammate made me an all-around setter, meaning that I would occasionally jump at the net to block.

As the opposing team’s outside hitter approached and swung her arm, Anna and I leapt up side-by-side. The hand motion was supposed to be a clean “up, press forward and down,” but a combination of my leaning too close to Anna and her hand coming down by her side resulted in a solid punch of her fist on my cheekbone.

There was a “ping” in my head. I stood blinking for a few seconds before registering that the ominous “ping” was likely a concussion — or my brain slamming against the cerebrospinal fluid (hey, shut up biology).

Anna could not believe it at first and I found the situation too hilarious to be put off. My coaches, too, were incredulous that I got punched by Anna. Again. But the rising swollenness of my cheek quickly convinced them to substitute me off the court.

While I did finish the season in high spirits, I dropped club volleyball the next year; my subconscious mind might have decided that the trauma — and Anna’s fist — were too much to take.