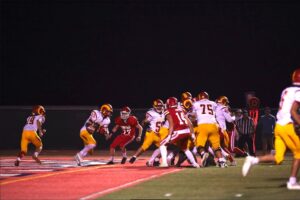 Permalink
After starting their season with a 1-1 record, the team’s plans of going undefeated for the rest of the season remain unchanged.

Recap: In the El Camino league last season, the team’s only win was their Homecoming game against Monta Vista. With heavy injuries to an already small roster, they forfeited three games near the end of the year.

After celebrating their first game with a 27-0 win against Yerba Buena on Aug. 26, the football team was met with a disappointing 48-34 loss at home against Willow Glen on Sept. 2.

“Obviously, a loss never feels good, but everyone is still prepared to take on the next challenge,” senior running back Paolo Navarro said.

He noted that the team has made huge improvements in comparison to last year: After adjusting well to new head coach Steve Matos, the offense scored nine times in their first two games in contrast to last season, when the team did not score until their third game. Furthermore, their offensive linemen have greatly improved, and they have a much more aggressive defense than last season.

However, the team, with only 25 varsity players, is still facing multiple injuries and logistical headaches. Only two games into the season, there are two knee injuries, one foot injury and an ankle injury. Last season, the team ended with five concussions, four shoulder injuries and a broken leg. In addition to lacking a full roster of players, the Falcons lack a full coaching staff, and the problem has made practices tougher to coordinate and manage.

Despite these obstacles, players are still optimistic their season will be better as they take on opponents such as Mills, Monta Vista and South San Francisco in upcoming games.