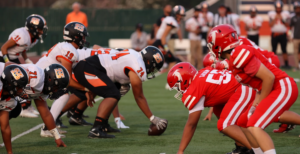 Photo by Lori Timmons
The team lines up defensively against San Mateo at the line of scrimmage.

After the opening football game at home against San Mateo on Aug. 26, the crowds began to funnel out of the stadium, followed by the teams and their coaches.

Senior wide receiver Parsa Hashemi was left in tears on the field, disappointed that his senior year season had gone off to such a bad start.

The Falcons lost to San Mateo 34-0, a disappointing result against a team they used to beat in preseason scrimmages.

“I’ve been used to losing,” Hashemi said. “But I hoped that this season would be more promising. [The game] was very demoralizing. It was not OK.”

The team has suffered from a lack of players at the start of the season. Junior backup quarterback Ethan Kung was unable to play due to personal circumstances. Junior lineman Aarav Badani was involved in a car accident earlier in the day and could not play in the game (Badani did not suffer any serious injuries). To make matters worse, two of the five linebackers — senior Ryan Ho and junior Jack Burgess — were injured and replaced by receivers.

“We thought we would win the game,” Hashemi said. “I don’t think we realized that there are other teams out there that are doing the same thing we’re doing. They’re being coached too. We need to know what we’re up against and stop thinking we’re the best team in this league.”