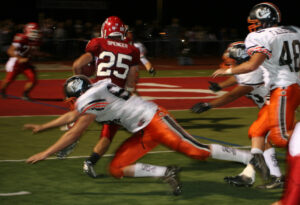 Senior Mat Spencer scores the first touchdown of the game.

For about 46 minutes on Friday night it seemed this year’s Falcons would make history. For 46 minutes it seemed Saratoga would finally be able to celebrate a victory over Wildcats for the first time in 29 years.

But a football game is 48 minutes long.

For about 46 minutes on Friday night it seemed this year’s Falcons would make history. For 46 minutes it seemed Saratoga would finally be able to celebrate a victory over Wildcats for the first time in 29 years.

But a football game is 48 minutes long.

Tied at seven with just two minutes left in the game, the Falcons were driving. The defense had played a phenomenal game, sacking Los Gatos quarterback Nick Hirschman several times and holding his potent offense scoreless until just six minutes ago. Saratoga had gotten a touchdown from senior running back Mat Spencer midway through the third quarter on a pressured throw from senior quarterback Michael Guercio, but Los Gatos had come back with a score of their own on a deep pass from Hirschman to wide open receiver Andrew Berg after blown coverage by the Falcon defense.

Now, the Saratoga offense was in a position to seal the deal. Close to—if not already in—field goal range, the Falcons just needed to run down the clock and hope senior kicker Chris Chung could boot the ball through the uprights to win the game.

On third down, senior running back Tim Yen received a pitch from junior quarterback Vincent Carstens…and dropped it. The Wildcats pounced on the fumble and Hirschman led his team down the field to the Saratoga 5-yard line, where kicker Pat Impey knocked in a field goal and gave his team a 10-7 lead with just 23 seconds left.

At that point it seemed all but over, yet the Falcons stormed down the field again. They recovered a short kickoff at their own 45-yard line and drove about 25 yards in just 18 seconds. Still not in Chung’s range, they tried just one more short pass to Spencer, but the coaches could not stop the clock in time and Saratoga walked off the field just short and disappointed once again.

“While we are disappointed that we could not close [the game] out with a win, we re-established Saratoga as a competitive football program,” said head coach Tim Lugo. “Our players have been told by everyone in this community that they can not compete in the De Anza division, [but] anyone who watched the game Friday night will now believe in what we are trying to build here. I knew we were the better team before the game and I still feel we are the better team afterwards, regardless of the score.”

The Falcons will play an away game against Cupertino at 7:30 p.m. next Thursday, Oct. 30.