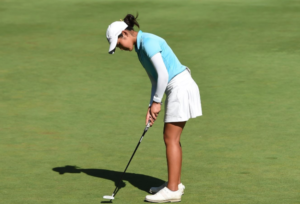 Walking up the hill at the 9th green at the Saratoga Country Club recently, freshman No. 1 golfer Sarah Lim took a deep breath as she placed her marker behind her ball. She analyzed the slope of the green for a few seconds, replaced her ball, picked up the marker and stuck it back onto her Titelist visor. With a clear mind, she moved her putter face back, let her arms take control and watched as the ball sank into the hole, parring the hole and contributing to her score of 42 against Los Gatos on Sept. 22.

Lim, despite her youth, has been the leader for the team in each match. After losing two members of the travel team to graduation last year, the team had struggled to fill its spots with experienced members who can shoot low scores. Those losses have been offset by the additions of Lim and fellow freshman Melanie Lee.

Lee and Lim have joined seniors Savannah Lin, Melody Li, Harshini Velchamy and sophomore Alicia Nguyen on the travel team. While off to a rough start with losses against Palo Alto, Monta Vista and Lynnbrook, the team recently won two matches against Los Gatos and tied with Gunn. With their 2-1-5 record, they stand 5th in the league. Lim currently is the 7th ranked player in the league, and she has qualified to compete in league finals.

Lim has been playing golf recreationally since she was 11. Her love for the sport originated from her dad and grandparents, who took to playing after a debilitating undiagnosed foot injury forced her to quit her two primary activities: dance and soccer.

“I got a bunch of x-rays and an MRI but no one could figure out what was wrong with my foot. I was in a boot for five months,” she said. “The worst part about it was quitting [dance and soccer], but it got a lot better once I started playing golf.”

After continuing to play golf recreationally throughout middle school, Lim started practicing more in her backyard during the stay-at-home order last year. As her skill-level surged, her craving for competition followed.

Lim started competing in tournaments during winter of 2020, devoting almost every spare minute to the sport and going to tournaments every weekend. During online school, Lim would drive to a golf course right after school or even during her last period so that she could be early to practice.

“I would practice almost every day for about two to three hours after school, practicing until sunset,” Lim said. “Sometimes, I would even stay after sunset and use my phone flashlight to practice more. It was super time consuming, but I didn’t particularly mind because I’m a perfectionist so I would set a goal and stay till I got it.”

Over the summer, Lim played in age-grouped Junior Golf Association of Northern California (JGANC) tournaments, allowing her to consistently place in the top three to five. Lim has been competing in Junior Tour of Northern California (JTNC) tournaments over the past few months, a longer and more competitive league, placing top 10 in the majority of them. She has also qualified for American Junior Golf Association (AJGA) tournaments, traveling across the country to compete amongst the best in the nation.

While Lim has less time now compared to the summer due to school and her commitment to the school golf team, she still practices daily and goes to tournaments every weekend.

Lim plans to continue competing throughout high school, aiming to play golf in college and potentially beyond. While unsure whether she would try to play professionally, Lim just wants to focus on getting better.

“I worked and sacrificed a lot of my time, effort and even some of my social life,” Lim said, “but in return, I made new friends on the golf course and I get to compete in a sport I love.”