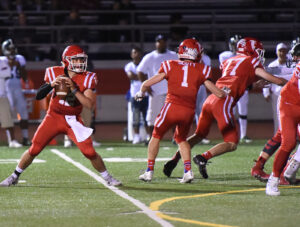 Quarterback Niko Rositano has been a key contributor for the Falcons this year.

In 2010, the Falcons welcomed Los Gatos into their territory for their annual rival showdown with the Wildcats. It had been upwards of 20 years since the Falcons had beaten their district counterparts, but with an energetic team and new head coach Tim Lugo at the helm, they believed that they could win.

And they did. Led by star quarterback Kevin Smith and a stellar defensive effort, the Falcons pulled off a 21-17 victory against the Wildcats, after which students and parents erupted in joy and stormed Benny Pierce Field to congratulate their Falcon players.

In the six games since then against Los Gatos, the Falcons have not fared well, but like the student body seven years ago, we can’t lose hope. Here are five reasons you should come support your Falcons against Los Gatos Friday night at home.

1. The Falcons have a chance at pulling off an unbelievable upset.

The Falcons come into this game at 0-8, recently suffering loses to the Wilcox Chargers 61-10 and the Palo Alto Vikings 42-21. With the Wildcats having a 3-5 record, the Falcons’ chances seem rather bleak; however, the numbers are a little deceiving.

The Falcons have lost three games in blowouts, but they have remained competitive until the last few minutes in every other game, down just one touchdown to tie and win most of the games.

Although the Falcons have had trouble starting their games strong, as well as closing out games when holding leads, you better believe they will bring their A-game, knowing that rivalry bragging rights are on the line.

The Falcons also are healthier than at some points earlier in the season. Two-way lineman Allie Liddle will be playing his third game of the season, and looks to be the same player that led the Falcons to a CCS bid last year.

If the Falcons stick to their game plan, grab an early lead and play good offense and defense to hold onto it, they can come away with their first victory of the year.

2. Los Gatos is having a down year.

Los Gatos has struggled to beat strong teams this year. They went 1-3 in the preseason, losing to Menlo-Atherton and Corona del Mar. Their struggles have continued into the regular season, and they are only 1-2 against opponents that the Falcons have faced. The Wildcats are also coming off a 45-7 blowout loss against the undefeated Milpitas Trojans. The Falcons’ 62-7 loss earlier in the year to Milpitas wasn’t all that different.

Additionally, the Wildcats starting running back, Will Fordyce was ejected in the Milpitas game, and as of early in the week, it was unclear whether he will play due to a suspension.

3. Come to support your seniors in their final home game.

The varsity team has 28 players, 16 of whom are seniors. The seniors have played their hearts out and fought through 38 games, and this is their final home game.

Senior captain and quarterback Niko Rositano, who has taken over the team this year, has proven that he can make a large variety of plays. He leads the De Anza League with 2,092 passing yards and 18 total touchdowns on the season.

On defense, senior safety Pranay Bettadapur is tied for second in the league with two interceptions, more than any single Los Gatos player, in addition to a whopping 43 tackles. Turpin and senior linebacker Alec Lindeman have also racked up 61 and 50 tackles respectively. Senior lineman Jake Beine is tied for fourth in the league with 5.5 sacks.

4. JV won last year at LG, and players from that team play on varsity this year.

Last year, JV shocked the league by beating Los Gatos 41-37. The game came down to the wire as a fumble returned for a touchdown by now sophomore Tyler Ouchida put the Falcons up by four points. Then, the Wildcats final drive was stopped by now  linebacker Justin Yagobi at the 1-yard line, sealing the victory.

The game went largely unnoticed because it was played at Helm Field and the varsity lost that same day, but it still shows that a victory is in the realm of possibility.

5. Make sure your team has a true home-field advantage, and you’ll get to rush the field if the Falcons win.

The last time the Falcons beat the Wildcats in 2010 at home, players, cheerleaders and fans all celebrated the hard-fought win. It was partially because of the fans’ constant enthusiasm and support that the Falcons came up on top.

If the Falcons manage to pull off the upset tonight, you’ll get a front row seat and experience a glorious moment in Saratoga’s history.